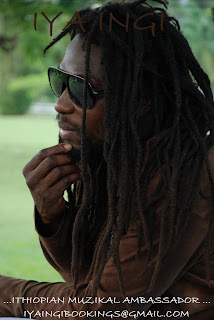 What elements do you create to make your music stand out from other peoples?

The elements that I include in my music to have it stand out is I don’t only try to put together words that are rhyming and melodies, I try to bring a specific message across. A message of love, a message of being aware of life and your surroundings and just knowing that we are all a member of a global community, which is iration as a whole no matter your religious background, political affiliation or the ethnic group that you are from. We are just a global community and that basically sums up my message out there that we are all connected in life because we are all here in life.

The more I interview the more I find that people hold the same view that we are equal, yet it is not coming out in the world somehow.

That is why I&I give isis to Hailie Selassie I because Hailie Selassie I is standing up for Ithiopians. Not just Ithiopian alone but I also chant for equality among all human beings. Like I just said, no matter political affiliation or religious background or race or class; All man is equal in iration.

You have chosen to take your name from Niyah Bingi which you say means death to black and white down pressers. Is this referring to the fact that both races oppress black people or that both black and white people are downpressed as you describe it?

I refer to the latter part of that question in terms of all people in history have come across oppression or downpression. The term Niyah Bingy is actually an incient word from outside Africa, Seen. Ithiopians chant Niyah Bingi. Niyah Bingi is actually the woman in the hills chanting but I chant Iyah Ingi which represents the man, the male section of the movement. So when I say Iya Ingi chant I am actually chanting for liberation, moving away from downpression from amongst I&I as human beings because at one point in time all nations of people have come across downpression.

Now, your Youtube channel is called Wissy Wissy. Is there an origin to Wissy Wissy or is it some kind of personal catch phrase?

No it is not a personal catch phrase. Wissy Wissy is the movement of the Mau Mau Wasusi Warriors. The Mau Mau Wasusi were actually an ancient tribe originating from out of Kenya and they were instrumental in the independence of Kenya. Mau Mau is the people and Wissy Wissy is the movement , moving from hills and valleys and it’s a swift tactical movement that was very complicated for the British colonial powers to study. The Mau Mau warriors Wissy Wissy movement was about moving from one point real quickly and attacking so swiftly from the hills, from the valleys so that the colonials couldn’t follow the movement. That’s where Wissy Wissy comes from, so when Iya Ingi says ‘Wissy Wissy I&I a Wiss you,’ that means ‘Wiss I am here this moment and I am over there,’ so they can’t study the movement.

That’s very interesting. Yes I. Yes because in a way you are bringing your music out to the people and making your own movements aren’t you. That is it.

Ok Iya, now let’s talk about your up and coming album.

Well this current album is actually my debut album and a lot of work has been put in it and is still going on. This album is going to represent Iya Ingi in such a way where it’s going to draw on a lot of the things that I stand up for as a person, as an individual and what I represent in the music. This is actually going to be a mission statement for Iya Ingi out there in the world. Whenever someone purchases this album they are going to have a general idea of what Iya Ingi’s all about. Things I stand up for, things that I’m against and what I represent. It’s actually a representation of my life and what life has taught I. Hailie Selassie have a stage where I always draw a particular phrase or a quote from where he says, ‘This is what life has taught I, I wish to share with others who want to learn.’

So what you are giving people is a platform that would work as an introduction to the Rastafarian faith?

Not just Rasta because I&I movement is much much larger than the rasta. I&I chant as an Ithiopian first and foremost. Ithiopians now in terms of you just recognizing that we are all a member of life’s community. In geographical location because Ithiopia refers to the whole land mass that they call Africa; it is Ithiopia to I. I don’t wish to import it on others but it is to show people about Ithiopian lifestyle, how we are and how we supposed to be.

I am going in a different direction for a moment. I know you have dedicated the song ‘Push On True’ to your mother. I am wondering what types of inspiration you draw from your family, specifically from your mother and from your children?

I draw a lot of inspiration from my mother because she is my ‘Rock of Gibralter,’ the one that instilled a lot of values, a lot of work ethics in me as an individual. I look up to her, I draw so much strength from her knowing that I was born in Kingston in a place called Mona Common and Kingston is one of the roughest places on earth to grow up. My Mum has always been there through my personal issues and supporting me as an individual pursuing a musical career. Whenever I am in doubt with anything or facing life’s challenges I can always look to her for strength so I have to dedicate that song to my Mum. My children motivate me in the sense of being a responsible individual, knowing that I am responsible for life and responsible as a role model. It means putting in so much work that they can look up to me as a role model doing positive things out there. I want the best for my children so I put a lot of work in what I am doing.


We’ll take a look now at your musical inspirations. I gather that you are inspired by Bounty Killer, Moses I and Jah Cure. In what ways does that kind of inspiration differ to the personal inspiration?

Musically, Jah Cure is a brethren that I know personally. We grew up in the same community. He’s actually from Montego Bay, but spent a lot of time in the early beginning of his musical career in Mona Common which is where I originated, so I am closely affiliated with Jah Cure. His inspiration, being a youth at that time and seeing someone I know personally take his musical career and go out there and do such a powerful work so I can look up to that individual. His vocal quality and the message he brings to the people, I just draw strength from that. Moses I also is a brethren from outside the David House Camp that Capleton is affiliated with and is a great vision of mine also. Moses I taught I a lot of things; how to hold notes, keys, how to listen and study a rhythm track and how to compose my words. I learnt a lot of that just from listening to things. Bounty Killer I draw a lot of inspiration from. I admire his imagination in the music and what he stands up for in terms of him relating his life experience and portraying it to the world. Also he is responsible for so much artists out there. Movado, who is a huge dancehall act globally and also Vybz Kartel . Bounty Killer is the one that really showcases all the artists. I really look to him as a person who exposes talent. I look at myself as the type of person who would love to have that grip on the music and expose uprising talent within my community and inside Jamaica or anywhere in the world.