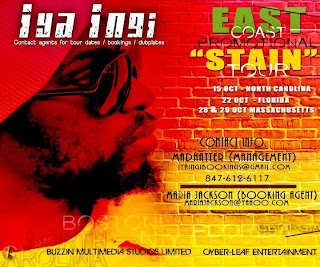 Iya, you have performed many times. What are the best moments for you that have really stood out?

A lot of moments stand out but one in particular in 2008 when I was on a tour in Holland. I was invited to perform at the ‘Shoot Me Film Festival.’ I was on stage performing a track entitled , ‘Save the Children.’ The message that I conveyed in it and the energy the crowd got from it was strong and a man grabbed up his little girl and she came on the stage. I was observing the joy that she had just being on stage and being able to touch me and interact with me and that’s a moment that stands out in my mind... to know that I have music that can touch people just like that. Being the individual that I am, I just love children generally, not just my own but all children of iration.

Could you tell us more about your current tour?

This current tour starts right here in Boston where I am at the moment doing some promotional work, interviews and making some ‘pass through’ appearances in clubs and other areas. I am letting them know that I am here and promoting 2 shows that I have here in Boston, Massachusetts on 28th October by Sammy’s Patio on Revere Beach and the second show 29th October in Cambridge at, ‘The West End Front.’ My first show will be 22nd October in ‘Club Royale,’ Tampa , Florida so I leave for Florida tomorrow. I will do more interviews, recordings and promoting. After the shows I go to New York and possibly Chicago for November. This is my East Coast Promotional STAIN Tour. We are doing this tour to create awareness in the US and next year are planning a global tour as I am getting requests from people all over the world through social networks including Asia, Canada, Japan and one important place I must make mention of is in Ithiopia. I was recently so honoured to get an invitation to perform there at a festival called ‘Reggae in the Rift Valley’ with artistes from all over the world. It’s on 4th December and to be invited knowing the sentiments I share is a privilege. It’s actually like a benefit concert, a charity event. None of the artists who have been invited will be paid. It’s being able to be a part of the movement and an honour and a privilege to be invited there. Actually, the next reason , it’s close to my heart is because my biological Father is living in Ithiopia and has been living there 17 years now. I haven’t seen him in 17 years and it will be a big re-union and being able to see even brothers and sisters I haven’t met before so it will be a great joy to have such a reunion. Also the first of December is my Father’s Birthday and it will be the first time he ever get the chance to see me perform live. He’s seen video tapes and stuff like that so give thanks to Jah for making this whole movement possible.

It’s an absolute blessing isn’t it.

Yeah man we give thanks for the opportunity you know coz it’s a matter of putting in the work and to see the work recognized out there and have people request you to come and perform. It’s a feeling of fulfilment and accomplishment.

There are gradually more events occurring in Africa. Do you feel the accessibility of good reggae artists is spreading more to the everyday African people?

Yeah man, the reggae music is spreading over there because even before I got this invitation, being on face book a lot of time promoters from all over keep asking when am I coming to Africa. Like everywhere, Kenya, Zimbabwe, South Africa, Ithiopia... a lot of places and that’s what I stand up for and I always represent Ithiopia in my music. I just try to give strength because Ithiopia has been through so much troubles over the years and a lot of times people just choose to capitalize on the benefits that they can get from going there. I as an individual just want to do some work that can benefit and when I say Ithiopia I mean the whole land mass they call Africa.

It’s the giving in life isn’t it that’s just as important as everything else to make you a whole person.

That is it because that is what has brought I&I to this point where I am in my life. It’s just giving because when you give naturally you will receive. Sometimes you just give because you are in the position to give and not really because you are looking for anything in return, so you give as much as you can along your path. It’s just the cycle of life and it comes right forward around to you.

So have you any idea when you are planning to release your album?

Well we don’t really have a set date but we looking at a possible time for the summer. I don’t really want to rush it because I really want it to bring out all the messages I want to give the world. I will take time to make sure that every song, every material that is placed on the album is properly done and a true representation of what I stand for.

Moving on to a couple of general things, besides music are there any other interests that you are keen on?

I am a very skilled individual because being in Jamaica is a rough rough place for anyone to grow up you know; so I have developed a couple of skills over the years and I exercise them. I also make natural juices, juices from fruit and grains of the earth and that is one of the things I really love to do. I would love to take it to a global level and have a business producing natural juice. Juice is a very essential part of anyone’s diet and when you consume food in a liquid state it’s easier for the body to draw the strictly necessary elements that is needs from it because most of it has already been broken down and gives the body less work. Check for instance the life of a baby consuming the food in a liquid state. The breast milk has all the essential nutriments in it.

Have you studied the health elements in the juices, the dietary side of it?

Yes I try my best to but I am not going to sit here and pretend I know everything but I at least try and have a general knowledge of the cause and effect of the juices. I had an inspirational moment once when I went to a juice garden here in Jamaica called ‘Earl Juice Gardens.’ It’s actually a brethren who does natural juices unsweetened and it was Moses I who brought me there. I was there observing a newspaper article that he has on the wall and it was so amazing I can’t forget it. The brethren that owns the business was actually diagnosed with a particular type of cancer and they gave him 7 days to live. They wrote up his death certificate and totally write off this man; he was going to die. What this man did he changed his diet. He was obviously introduced to this lifestyle by someone and by changing his diet and living off the natural things of iration that practically saved his life. He was so inspired by that he opened up his business. I look on that and have inspiration also. The natural vibe, you are what you eat and whatever diseases the body acquire there are foods on earth that can help the body get rid of that. The body cures itself at all times if treated naturally.

The last thing I would like to know is what would you most love for your children?

I would love for them to be properly educated first and foremost because with education comes choice. When you are educated then you have a choice because you can definitely see the direction that you want your life to go in. I am not a college scholar or anything like that but I have a proper educational background which allows me to express myself and it also allows me to make the proper choices that I choose for my life. That is one of the most important things I would love for my children and for all children of iration; to be fully educated, for them to grow up with high self esteem and confident in oneself knowing that you can make it. I will draw a reference from a particular song that I have where I say ‘No one can stop you, It is you who stop yourself’ because you have to know that life is the actions that you do that react of reflect what happens to you in the lateral. The important things I love for my children; to be properly educated, high self esteem and to be able to live life naturally and free.