REVIEW OF ‘FAME THE MUSICAL’ Performed by CODA 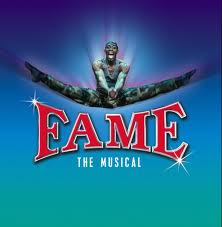 Introduction: It is a great challenge for an amateur dramatic society to produce and perform such a famous musical as ‘Fame.’ The first ever film called ‘Fame’ was produced in 1936. This was followed by the highly popular film ‘Fame’ in 1980, conceived by David De Silva & Jose Fernandez who wrote the book to accompany it. The students in De Silva’s version were attending the ‘New York High School of Performing Arts.’ This film was larger than life and captured the public imagination with stunning performances & memorable characters leading to spin offs; a TV series, stage musical & 29 years later (2009) a re-make of the 1980 film.

Performance: CODA’s version of ‘Fame was directed by Vicky Watkins. I attended the first night of this production and overall the show ran smoothly, the negatives being a little microphone problem and a slight lack of polish; which was acceptable with such a large company working within a relatively small stage area.

CODA’s story opened at the beginning of the new student intake with a rousing song prior to character identification. Although the characters had different names to the 1980 film with which I am familiar (!!), many of them were clearly recognizable and some original story lines were followed. The American accents were very good as was the rap performed by ‘ Tyrone,’ today’s ‘Leroy,’ played by Mitchell Laban. There were many excellent individual vocal solo’s, ‘Principal Miss Sherman,’ played by Sasha Cherry receiving tremendous applause. ‘Carmen Diaz,’ was without doubt my favourite character and Beci Sageman ‘s performance fit for the West End. The depiction of Carmen’s seedy lifestyle, displayed as little vignettes including pole dancing behind the veil of a curtain was exceptionally well done. Choreography was of a good standard throughout, excelling itself in the surprise finale which succeeded in exciting the audience due to the colourful costumes, strong collective vocal and highly energetic dancing. A little surprise was thrown with the finale however a surprise it will remain unless you are able to get along to any remaining performances!