Larry The Lamb Stars in ALADDIN!!! 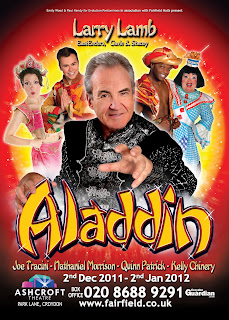 A BIG BRAAP THANKYOU to the FAIRFIELD HALLS for supplying the flyer & accompanying information!


Fairfield Halls is delighted to announce a new producing partnership with acclaimed pantomime company Evolution Pantomimes, renowned for their superb family entertainment, who present this year’s pantomime treat for the first time at the Ashcroft Theatre, Croydon.


Prepare to travel to the Mystic East for the best and most magical pantomime of them all…
ANTONY HANSEN, fresh from a West End run in the hit musical Wicked plays the role of Aladdin, with JOE TRACINI, who recently joined the cast of Hollyoaks (as Denis Savage) and appeared in the BBC3 comedy Coming of Age, as Wishee Washee. QUINN PATRICK is the outrageous dame Widow Twankey in charge of the Chinese laundry, NATHANIEL MORRISON the magnificent Genie of the Lamp and KELLY CHINERY the Genie of the Ring. The beautiful Princess Jasmine is played by ROSA O’REILLY, closely guarded by the Chinese Policeman OLIVER BROAD. PAUL TATE appears in a majestic role as The Emperor, and also directs the pantomime.


Colourful sets, spectacular costumes, fantastic effects, lots of fun, laughter, great music song and dance, not forgetting plenty of audience participation, make this a spectacular panto not to be missed!


Larry Lamb is known to millions for his roles in BBC TV’s award-winning comedy series Gavin & Stacey, as Mick Shipman (Gavin’s Father), and as rogue Archie Mitchell in the hit soap EastEnders. The public voted Larry Villain of the Year at the 2010 British Soap Awards for his portrayal of Archie with EastEnders also receiving the Best Storyline Award for Who Killed Archie? Larry has recently added author to his extensive acting career, which includes a wealth of credits embracing television, film and theatre, and is currently enjoying success with his first book Mummy’s Boy: My Autobiography.


Aladdin offers great value with tickets at just £15 for all performances during the first week, from Friday 2nd to Friday 9th December and following performances £18, £22.50 & £26. Concessions are available for children, senior citizens, schools, groups and families. A booking fee of £1.50 per ticket, £1 if booking in cash, applies.


Tickets are available from the Fairfield Halls Box Office 020 8688 9291 or online at www.fairfield.co.uk

IF YOU WOULD LIKE YOUR EVENT FEATURED CONTACT US NOW ON ITSBRAAP@LIVE.CO.UK
Posted by ITS BRAAP ITS LIFE !! at 19:12

Email ThisBlogThis!Share to TwitterShare to FacebookShare to Pinterest
Labels: 'larry the lamb';'fairfield halls'