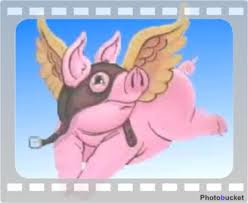 Pretty obvious really, it’s simply a question of wings! Let’s consider for a second; a pig is not really that different in shape to a bumble bee is it? Slightly heavier maybe but the real difference is that a bumble bee has wings & can fly despite the fact that it’s a technical impossibility. At this point we will step away from pigs, bumble bees and especially technicalities.

The beauty of this is that we are entrenched in certain modes of thinking and when these are twisted around by clever people all our pre-conceived ideas are challenged. In cartoons pigs can fly; FACT. The reason for this is that our imaginations are pretty much limitless whereas the physical world is full of boundaries both real & imagined.

In some instances with pure grit and determination some of us mere mortals are able to achieve beyond other people’s greatest expectations. An outstanding example of this is James Dyson who had the idea to produce a bag-less vacuum cleaner. How mad that must have sounded to people at the time, although the main point was to produce a vacuum cleaner that retained greater suction beyond the limits of a full bag. Of course this was not James Dyson’s first invention which was a ‘Sea Truck’ and he had used a ball for his ‘Ballbarrow,’ a wheel barrow that had the wheel replaced by a ball to increase ease of mobility. Its success brought Dyson into the public’s awareness.

Even with a brilliant new product Dyson had to face a huge challenge to launch his revolutionary invention. The British marketing powers that be were not having Dyson's vacuum because it was economic suicide in the world of dust bags. So, Dyson had to find an alternative method to sell his unique product & his pig eventually started to fly when the new vacuum was distributed to Japan via catalogue sales winning James Dyson the international Design Fair Prize in Japan, 1991. 'Fly' isn’t quite correct because the UK market continued to ban the manufacture of the ‘Dyson’ leaving only one alternative; James Dyson had to set up his own manufacturing company to get his product into British homes.

What we are looking at here is making the dream become a reality which is different from chasing a dream. James Dyson was determined to succeed so it was always a question of ‘when’ not ‘if.’ His product was originally called the ‘G-Force’ however has been re-named the ‘Dyson’ which is a tribute to his monumental achievement and proof that failure was not an option.

The major lesson we learn from this is that if you want your pig to fly, one day it will. How you decide to attach those wings is entirely up to you but ultimately it can be done! James Dyson is Braap... he is a living example of our slogan, so go ahead... ‘Be Braap Be PC!’ ~POSITIVE & CREATIVE~