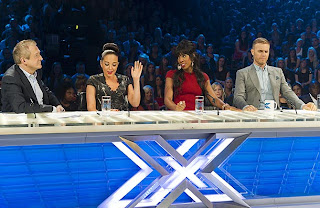 I don’t know what you think about this somewhat notorious show which Simon Cowell has swept across the Atlantic landing it squarely in the middle of American prime time TV.

The X-Factor UK has been on an ‘extraordinary journey ‘and produced a couple of quality stars, Leona Lewis & Alexandra Burke springing to mind. Must say, Leona does nothing for me... predictable every time; in fact I had to laugh when I heard that her autobiography was virtually a glorified picture book!

Anybody who would like the low down on the X-Factor should pick up a copy of Ben Elton’s book ‘Chart Throb.’ Ben has sussed it out to a tee and watching the show rapidly deteriorating in front of our eyes it’s fast becoming the ‘desperation factor.’ First Jedward, then Wagner... what on earth was all that about? Followed this year by Goldie who was clearly bonkers and couldn’t sing; very sad to see a man like Louis Walsh with a sharp reputation prior to the competition lowering his standards to find his ‘wind up the public’ factor. My thought... Goldie was paid off to disappear quietly! On top of all that we viewers and also some rejected worthy contestants have had to contend with the deplorable ‘bad bwoy‘ behaviour of Frankie Cocozza ( I was told that a comedian had referred to Cocozza as the Italian for coke head!!) Personally I imagine Gary Barlow had anticipated being able to strengthen Frankie’s voice and turn him into a soft rocker, sadly such a feat was beyond his capabilities... Soooooo exit Frankie. Quick thought... was the double eviction planned with a view to the unfolding drama?

It now looks as if the X has become a symbol for the major cover-up of several catastrophic decisions. The show is a shambles, very unfortunate for the 3 worthy contestants; Misha B, Marcus Collins & girl band ‘Little Mix.’ Love or hate Kitty Brucknell the woman can sing & perform.

What happens next? We will see how the producers are going to rectify the current situation. Evidently the plan is to replace Frankie which will leave the new contender weeks behind with regard to professional tuition & the experiences of performing week after week in front of a live crowd.
X-Factor?!?!?! Xtreme, Xcrutiating, Xtraordinarliy irritating... come on people and add your own... and maybe we should demand a public Xplanation form Mr Cowell & the programme producers!