POP TO ART!! Interview with a difference ~ Presenting Anna Jacobs 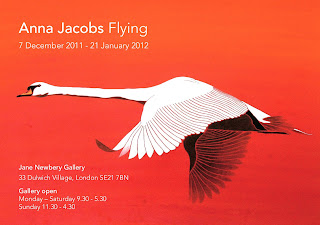 The story of Anna Jacobs is quite remarkable. Anna is one of the most inspiring and determined people I have ever met. She has hit the heights and taken the decision to give up everything in order to be true to herself. In the past Anna was involved in music, even working with Robson & Jerome, however has recently returned to her passion for painting. Anna had her first paid job at 10 years old illustrating an advert for a children’s clothing label. Since then she has done a million things and is now back in the artistic loop exhibiting her paintings in the Jane Newberry Gallery, Dulwich until 21st Jan 2012. ‘Flying’ is a collection of paintings depicting birds in flight. The paintings are beautiful yet should be regarded as mentally stimulating for those who thrive to understand the challenges of life!

How did you first discover that you were good at art?

I had an amazing art teacher called Barrington Barber at my first school & he’s actually a prolific author who has written about drawing techniques & published many books. Barrington was a practising artist & a graphic artist. He appreciated my art and encouraged me from quite a young age to pursue a career in art & I managed to achieve a grade ‘A’ for my ‘O’ level. Barrington thought I might be able to make a living through art. Even before that my handwriting at school was very good & slightly hilariously, when I was 9 years old I was asked to teach my class good handwriting!

Did you go to Art College?

No, I went to another school & did ‘A’ levels in art and although I enjoyed the creativity and lesson structures, the fact of taking exams put me off. I actually wanted to be an actress but I was also academic & went to Bristol University instead.

What did you study?

I did a classical studies degree covering Greek and Roman literature and history as well as the Ancient Greek language, then I did a masters degree in gender & social policy.

What did you plan on doing with it when you left university?

Well , I set up a business in a partnership, an all girl acapella band called ‘The Shrinking Violet Partnership. ’ We were a band but we were also teaching gender awareness in schools. A ridiculous thing to do at that age of 21, teaching 15 year old boys; it was a disaster!

The ‘Shrinking Violets ‘ were successful in some ways because we were quite successful in Bristol which is where we were based & we have a dubious claim to fame. We auditioned for Simon Cowell in the foyer of the Stock & Aitken recording studios and Simon immediately told us to go in and record with Stock & Aitken. We recorded the backing vocals for a Robson & Jerome song. They were the people who catapulted Simon to major success & we supported them on their live gigs. Robson & Jerome covered one of our songs ‘Love You Forever,’ (originally written by Paul Berrington) on their #1 self titled album & we did a live gig with them in Newcastle and were on their video which was brilliant fun! Then, as the Shrinking Violets we were interviewed on Radio for Woman’s Hour by Jenny Murray & sang live on the programme. We did HTV & were in a TV Robson & Jerome vehicle ‘Ain’t Misbehaving’ on ITV. We did a few more things like that then we split up.

Which direction did you take next?

I pursued a Theatre Career which is probably closest to my degree! I was then the administrator/production/producer/marketing person for a company called, ‘Clean Break Theatre Company’ which is a company for women ex-offenders and ex-prisoners.

Is the company still running?

Yes it is. I managed to get the first co-production for the company with the ‘Royal Court Theatre Upstairs’ & we did a production by Winsome Pinnock called ‘Mules,’ which was fantastic.

Actually before that I worked for a company called ‘Molecule Theatre Company’ which presented science for children & was an amazing company. Very sadly it went bust after 27 years while I was there due to difficulties with the main funders.

Soon afterwards I developed an interest in the Eastern style religious teachings of an American Spiritual leader. I was intensely involved, a committed student for 6 years. During that time I was mainly doing that and went between the states and the UK. I did a bit of music production with an American Music Label called ‘Metro Music’ and I coordinated the London Recording sessions & auditioned & hired the singers; amazing young opera singers and we made an album called ‘The Classical Child at the Opera’ which got brilliant reviews by Billboard magazine in America. In 2000 it was awarded the American Library Association’s distinction ‘Notable Recording For Children,‘ which was great.

What was your next move following the Award?

Actually in 2000 I started my life again from scratch at the age of 30. I left the spiritual community because I became disillusioned and returned to the UK with nothing but my independence!


I had been in America for a year and returned to London having no idea what to do with my life. I volunteered for a charity called, ‘The Cancer Resource Centre’ and helped them organise a celebrity fundraising event in memory of an amazing author Stuart Browne. A team member asked me to organize a party for her husband who had just been made a senior partner at his prestigious city law firm. This resulted in me being offered a full time position to set up and head up their Marketing Department. I intended staying a year but remained for 8 years. The corporate life was not my natural environment so I made it as creative as possible. I was head of style & brand guardian for the firm and managed to include some portrait photography for them. 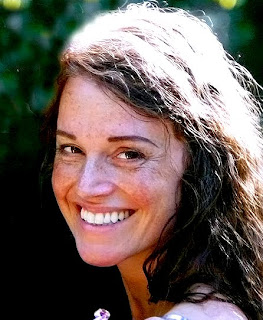 By this point I was craving creativity so I started painting again & did a short course at Camberwell. I set myself a goal and invited friends and family around to see my paintings. That sparked the whole thing. I had a little garden in my house at Camberwell and was awestruck by the beauty of plants and flowers, so all my paintings were of them! I was fascinated by the ageing process of plants and flowers, how they change through the seasons and what part ageing & imperfection plays in beauty; especially as they were beautiful at every single point.

Have you ever taken anything from your observations of the plants and applied it to yourself as you have grown older?

Yes in some ways and that is partly why I am fascinated by it. I am more conscious now at 42 of ageing. I have got away with it pretty much up until now (laugh) but I have very little time left before my face really starts sagging & the wrinkles will form! I am having to really face it and it is an interesting time. I am really trying to address it and am thinking of doing a project photographing wrinkles & lines on women’s faces close up and making absolutely beautiful photo’s juxtaposing them with stories of the women’s lives. I don’t want to have surgery or get obsessed with it but I fear it I have to say. I want to face it and embrace it at the same time, just be who I am which is an ongoing process and I’m sure it’s the same for all women.

What else have you enjoyed within art?

I have also worked with plaster & acrylic as I was interested in the etching process; scraping into the plaster & painting underneath.

After 8 years with the law firm your creativity clearly took over so what was your next move?

By this time I had 2 children and wanted to focus on my creativity, namely pursuing my paintings and to become an interior designer. So I went to ‘Chelsea College of Art & Design’ and ‘Central St Martins’ & I did interior decoration & interior design courses at both, with the addition of textile design at St. Martins. My ‘Flying Show’ came about when I moved to Dulwich & there’s a wonderful shop that has a gallery. I was talking to the owner and she looked at my website there & then and offered to put on an exhibition of my art. The subject matter for ‘Flying’ is taken from my struggles within the previous intensity of my life and my fight for emotional /creative freedom namely the ability to be myself. I have often been advised to earn my living creatively and pursue my art and finally feel that I am doing that. I am confidently finally ‘Flying Free’ with inner peace & stillness and that’s what the show is about: Being representative of that moment when you fall into the pocket of who you really are. The birds also represent natural joy combined with the exhilaration of movement.

How many pictures are in the collection & how long did it take to paint?

I am showing a combination of 26 works, framed paintings and prints. There are another 6-8 different images I am showing as unframed prints. I actually ended up having to paint the whole show in 3 weeks! I thought I would have a few months but in the end it wasn’t to be. I was suddenly offered a job at Chelsea Art School teaching a short evening course about colour theory and also my son Zach was starting school and had a long introduction, oh my God, 35 minutes for his first day and it went right to the end of September! I was about to start painting when I was suddenly offered a really fantastic interior design job that I couldn’t refuse. I took the interior job to the limit when I told my client I would get him into the apartment. I had to completely re-do the 3 bedroom apartment in 3 weeks and I had to re-floor it, re-decorate it, put in new lighting and complete every furnishing detail to cutlery & tea towels. I managed to get him into his flat by 19th October & I started painting on the 21st October, only to realise that it was the beginning of a 10 day half term break. Even this was interrupted when the kids were sick & I still had to keep on top of the interior design project! In the end it was literally 3 weeks of painting.

Anna, that’s unbelievable! You come under the heading Phenomenal Woman, you’re definitely on my list of Braap People.

No Jaz, (laugh) it’s just a needs must I think!

Anna’s work may be viewed and purchased via her website: http://annajacobsart.com/

Don't forget to check our album which also contains Anna's work & other aspects of Its Braap. http://s1106.photobucket.com/albums/h380/ITSBRAAP/

If you have an interesting story or would like your art, poems, fashion design or project featured here on our Blog contact us itsbraap@live.co.uk