Have You Got The Flow? AKA the Urban X-Factor!! Interview with TIPSY DEE

Have You Got The Flow? Interview with Tipsy T2N (Time 2 Network)

Its Braap recently interviewed young entrepreneur Tipsy Dee, founder of the event ‘Have You Got The Flow; which has been dubbed ‘The Urban Worlds’ X-Factor.’
In less than a year this event has leapt from minor venues to the O2, a tremendous jump which signifies the passion & hard work Tipsy puts into everything she sets her mind to. This interview is primarily focused on ‘Have You Got The Flow,’ and Its Braap would like to thank Tipsy for taking time out to meet us.

Where did you get the idea for an Urban X-Factor?
The ‘Have You Got The Flow’ event came about because I work in the entertainment industry & have worked in the entertainment industry for quite a few years. I consider myself a creator, so everything I do is in my mind, it’s original and the stuff that I do I think there’s a need for. Basically it’s simply that I thought there was a need for an Urban kind of X-Factor, so I gave it a try in a small venue to see how it would go and it went fantastic. The venue was over flowing and everybody was really interested so I decided to make it official and it’s going to be running 2-3 times a year from now on. 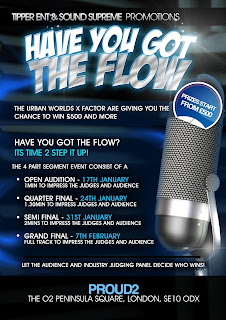 Did you start this up last year?
Yes, last year and we only ran 2 trial periods which lasted for 4 weeks; every event runs for 4 weeks. We did that just to test it out and it went really well.

Are you thinking of having an event just for your winners to find an over-all winner?
Possibly, that might be something we consider in the future but the plans are just to grow the brand, create the brand and make it a bit bigger by doing different projects and workshops off the back of the events and create opportunities for up & coming talent.

Is it something you will be promoting in the schools at some point to get the youth interested?
Yes, I have one youth event. The thing is that they take so much more preparation and planning when you’re working with under 18’s, but in the near future we are definitely going to be running, ‘Youth Have You Got The Flow?’

What kind of prizes have you got on offer?
At the moment we have a £500 cash prize and that’s always the main prize and we can introduce other prizes, it might be a video shoot or studio time. It just depends basically who’s involved and what other offers we can get from people who sponsor us.

What kind of step up the ladder has this given to the artists who have taken part previously?
A lot of the artists I have since seen collaborating with other artistes who have come along. You see them in the breaks outside singing, MC’ing & rapping together. I have seen a lot of them become friends, featuring on each others tracks, going down to each other’s studio’s, featuring in each others music video’s. A lot of them know each other now so all the artists who come leave with something, so even if they don’t win they leave with some kind of connection. I have seen it happen a lot with my own eyes so that’s very good; I’m happy with that.

So you’re promoting quite a lot of positivity & good vibes amongst the youths.
Yes.

What type of acts do you actually attract under the urban banner?
We have all sorts. We have singers; we attract quite a lot of rappers, beatboxers and comedians.

Do you pre-screen artistes & listen to any of the tracks before you decide who’s appearing?
No, not for ‘Have You Got The Flow’ we don’t because the first round is an open round and you only get 1 minute to show what you got. So basically they have their 1 minute and it’s their time to shine, so every one gets a chance to be seen no matter what level you’re at, where you’re at, who you are. You have a chance to be seen, time permitting.

How is it judged?
We have an industry judging panel, so for every event we select different professionals who are experienced in the music industry and know what they are talking about. They come down and sit on the panel. The act performs and they make a decision, whether they think the act should go through to the next round or not. Also the audience vote. They have a green card and a red card and at the end of the performance they hold up their card, green for yes or red for no, so the audience is involved along with the judges.

Where do you want to take it in the future because you’re already at the O2, which is an incredible jump and how did you to manage acquire the O2?
Well I have a quite lot of experience in the entertainment industry. I have managed to build up a big network, I’ve been blessed to meet some lovely, lovely people and I’ve worked really hard so my foundation is there. From the things that we’ve been doing O2 was the next step. We had to go there otherwise we would have stayed where we were. Obviously 'Have you got the flow,' was in a small venue initially and I also have 'Time 2 Network' which is now in quite a big venue, The Vauxhall Coliseum. It’s just the timing, I thought we were ready to go and make it a bit bigger.
We have a lot of plans but I don’t like to say too much because I’m more of a doer. But we want to take 'Have you got the flow' out of London basically and give everyone everywhere the opportunity to be seen.

Is it something you would like to present on more of an international basis?
You never know what the future holds, possibly.

Tell us more about Time 2 Network.
It is an industry networking event. Again an urban networking outfit with a talent showcase competition, fashion show which is a model search and it is an industry networking party. We have acts that come and compete for prizes like studio time, magazine features and record deals. The models are also competing for prizes like modelling contracts, photo shoots etc. You get loads of industry people whether it’s clothing brands, radio owners or TV Companies. Everyone from the entertainment industry comes down and networks, so networking really does happen. You get some events where people say it’s too network but nobody networks. Here we network; people are exchanging cards, giving out their CD’s and giving out their magazines. The clothing labels are there and everyone just networks. That’s what it is, Time 2 Network. It’s every 3 months and has been going for just over a year and each event gets bigger and bigger, so that’s another big event now.

So, Tipsy where can we find you?
You can look me up on Facebook which is Tipsy Dee and any of Tipperents links.

Is there anything else you would like to add?
I would just like to thank you for coming to interview me and I wish Its Braap all the best.

If you would like us to feature your event contact itsbraap@live.co.uk
Posted by ITS BRAAP ITS LIFE !! at 20:59

Email ThisBlogThis!Share to TwitterShare to FacebookShare to Pinterest
Labels: 'have you got the flow'; 'Tipsy Dee'; Tipper ent'; 'uban x-factor'