Firstly, an interesting development> I am playing the part of Asclepios as actor Michael Hall can't make the Sunday - so the cast had to work me in to the mix but we all got through it!. 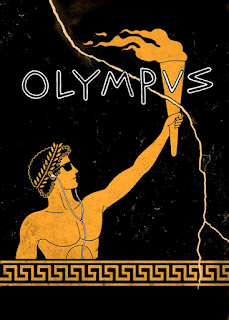 Ran through the abridged version of Olympus on Wednesday for our RSC Openstages Workshop performance on Sunday 22nd at Questors Theatre in Ealing. This abridged version is narrated by 14 year old lad Ted Robinson - who does a fantastic job (on two rehearsals!)

Carole's foot is getting better.

Last week had a tea party to fundraise for Olympus and raised £400 singing songs from the show. Maurice Reeves of Reeves Sofas was there and commented on how positive the whole Olympus experience was for Croydon.

The Croydon College students are pulling their weight now and building towards performance.

The cast are starting to get their heads round the musical and it is coming off the page nicely.

Always feels that you'll never get there at this stage, but have to hold onto that "Olympic" Spirit and battle on.

NB: Maurice Reeves is owner of 'REEVES', the store that was burnt to the ground in the Croydon riots and who is now privvy to occasional press coverage.

~IB~ woud like to thank Chris for Bringing us the Braap on Olympus.

If you are running an interesting event that you would like featured on ~IB~, join Chris by contacting us! itsbraap@live.co.uk
Posted by ITS BRAAP ITS LIFE !! at 13:32