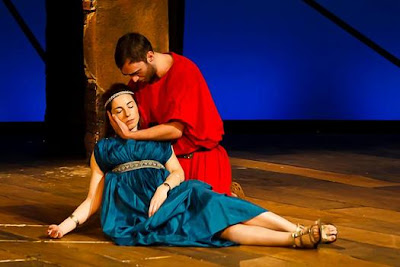 This has been an exciting week for the cast of Olympus, with 30 members attending their first public ‘run through’ performance at The Questors Theatre Ealing. This was obviously a show and tell moment- revealing the cast’s overall determination to put on a good first performance!

Ted Robinson, aged 14, coped extremely well playing Zeus who was actually the narrator and he popped up onto the stage via a trap door. ~They say life in the theatre is never boring! Ted basically was in the position of telling the story which was no mean feat as he had several monologues to recite and did an excellent job by all accounts. Christopher Backway, another young actor, also lived up to expectation playing the part of young Homer.

The show went well despite a few challenges... Ian Rae playing his keyboard from a walkway at the back of the theatre instead of on or around the stage, which could have had serious effects on the timing of the songs. In addition the actors give an acoustic performance due to the absence of mic’s! Around 100 people attended the show and Chris is pleased to announce that progress is very good and they are looking forward to the next challenge, stepping up the technicalities for the Ashcroft Theatre, Fairfied Halls. Attention to detail is clearly the order of the day. Finally, as Chris pointed out, with performances commencing 9th May at the Ashcroft Theatre it is definitely a race against time!

For details of Olympus and Another Way Theatre Company productions check this link: http://www.anotherwaytheatre.co.uk/index.html

If you are involved in an exciting or original project, not necessarily in the theatrical genre, contact us: itsbraap@live.co.uk
Posted by ITS BRAAP ITS LIFE !! at 09:00