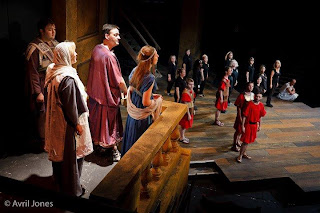 All pictures by Avril Jones: www.avriljonesphotography.co.uk

We have been looking forward to this event for quite some time, Olympus Being one of our first ~IB~ Babies and dear to our hearts! For those not in the know, it was originally a piece of musical theatre written by Ian Rae & adapted to a musical by Ian and Chris Chambers who wrote the book. (For full history please check previous blogs.)

I am delighted to say that this musical has exceeded all expectations from the staging- including the medallion style overhead screen used throughout to inform and emphasis events- to the beautiful music, costumes and intricate choreography. The actual set was magnificent and allowed ample room for all 60 actors to grace the stage!

I was particularly impressed by the diverse nature of Ben/the God Zeus’ character, (played by Kevin Hayes,) changing from playful Ben at the rehearsal for the Olympic Games to the stern figure he portrayed as Zeus back in Ancient Greece. Everybody in the cast from Handmaidens to the Greek chorus and Helena’s pupils played their roles extremely well. There were several dual characters cast between modern day personalities and ancient Greeks, Gods or otherwise who were not in the least confusing! I think transition between time zones was extremely well done which helped. 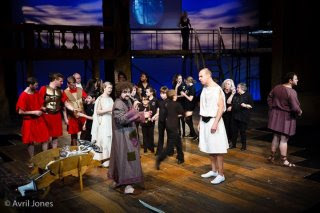 In addition to the powerful Greek Gods we witnessed conflict between the Athenians and Spartans, being taken from one moral dilemma to the next all with the aim of helping the very selfish, ‘ See how I love myself,’ Dimitry Raphael, (Neil O’Gorman,) take stock of his life and gain an inkling of the compassion needed to appreciate his own people... and poor long-suffering wife... just in time for fatherhood it would seem!

The attention to detail was most impressive. The characters were clearly identifiable, Gods wearing illuminated crowns being an excellent touch. Young Homer had a very prominent role and was confidently played, I believe by Simon Perry on this occasion... we are already aware that Christopher Backway is extremely good in the role!

Kudo’s to all the main characters, particularly Jennie Fox and Glyn Williams, (Thetis and Peleus respectively,) who sang some gorgeous yet tricky duets. James Caldwell gave a memorable performance as Nestor and I was pleased to see Vicky Watkins playing the God Hera as it was Vicky who brought Olympus to our attention. There were many children taking part and they all did extremely well, finishing with huge smiles when the show came to an end. For a full list of characters check the Olympus website opposite.

Chris Chambers produced a very deep yet witty script that was both challenging and emotional, making Olympus a thought provoking, contemporary work of art. The cast were very professional and consisted predominantly of passionate amateurs; a reflection resulting from the clear direction of the production team and a great deal of dedication from all concerned. 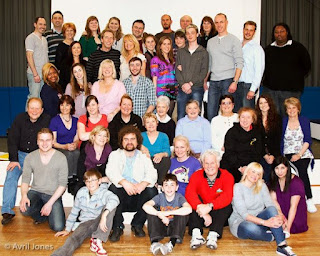 ABOVE: The Cast of Olympus

On a personal note, I am sorry that this show is having a very limited run and when the flame was placed in public view to open the Olympics I felt like saying, ‘Long Live Olympus... A race against time!’