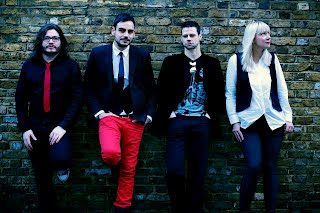 We are jumping on board more-or-less at the beginning of E-MUTE'S musical journey. A new rock band put together by enthusiastic young drummer, Theo M., who felt a compelling need to do more with his music. The band itself is made up of experienced musicians... Tolis Zavaliaris, Darren Ashford and Svetlana Vassileva, who have played for world famous names... more on this in our initial interview with Theo coming shortly!... does the name Chaka Khan mean anything to you?

What to expect of their music?
'Great melodies, dark edgy rock, electronica and philosophical lyrics,' are the words straight from E-Mute's mouth used to describe their musical style. This band already has a small following after only 3 gigs. If you would like to check them out they will be appearing this Friday, 1st June at UNDERBELLY OF HOXTON, 11 HOXTON SQUARE, LONDON NW 6NU (change of venue as originally booked for 100 club, Oxford Street!) Tickets are £8 at the door but Its Braap can forward your name to be included on the guest list (£5 tickets) if you contact us by Thursday. itsbraap@live.co.uk First come first served!

For a quick taster check out their website http://www.emute-music.com/