EVERYBODY DREAMS~Be in the know about this amazing new project!! 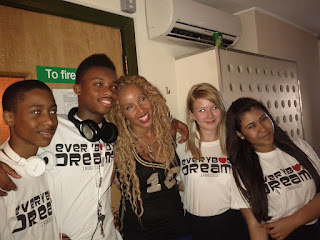 Last Thursday saw the launch of the ‘Everybody Dreams’ campaign at the Premises Studio, Hackney with an official reception where people were invited to listen to 2 versions of, ‘Everybody Dreams,’an amazing track produced for Gladesmore School, Tottenham. This may well be the greatest phoenix to rise from the ashes of last years riots as today’s youth are speaking their minds and rejecting the negative impact left in the wake of the riots. Fortunately these pupils have inspirational teachers to encourage and guide them with this particular dream!

Thankfully, Tottenham’s young people do not wish to dwell on the destruction of yesterday and have come together to give their views in a song aimed to unite and inspire people within their community, the UK and beyond.

... Partial lyrics, devised from the multitude of ideas put forward by the youth to express their opinions. Everybody Dreams has had input throughout each stage of the recording process from top people within the musical industry and the results are very impressive. Both versions are highly commercial with one destined more towards the radio and the other for the clubs as somebody summarized! The pupils are aged between 11-15 and there are around 75 of them singing however their voices have been skilfully blended ensuring that the 3 main vocalists, Vivian Reis, Aleksandra Lipinska and Kimarne Henry are not over-powered. These singers have excellent voices producing something that is not your average school song! In fact, speaking with Aleksandra and Kimarne I discovered that they are very keen to continue in the music industry as is young rapper Nico Clavier whose rap lyrics and delivery are most impressive... We were told that Tinchy Strider and Chipmunk came from this school so who knows what potential it harbours! 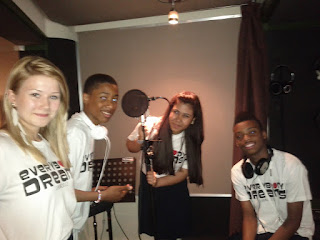 RIGHT: (Left-Right) Aleksandra, Nico, Vivian, Kimarne
Everybody Dreams has already created quite a stir and gained support from the musical community, Tottenham Hotspurs F.C, major businesses and different influential people- so we anticipate that the downloads will fly and Everybody Dreams enter the charts when the track is released on 19th August, a year after the riots! Leona Lewis and Ed Sheeran have shown their support along with some of the reggae stars- Lloyd Brown, Victor Romero Evans and Janet Kay... whilst Wayne Marshall is actively dedicating his efforts to advancing the project. DJ support is growing with Chris Moyles, Tim Westwood and Choice FM presenter Kojo on board so Everybody Dreams should be coming to a radio near you!!

~IB~ will be bringing you more about this project and urge you to share it or contact Juliet Coley if you are a DJ or can be of help- for more information, facebook/twitter links and video footage check the school website: everybodydreams@gladesmore.com

If you are involved in a noteworthy project contact itsbraap@live.co.uk