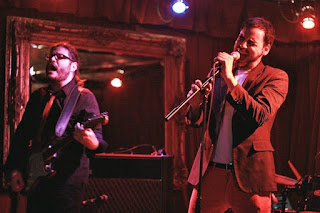 ABOVE: Theo (singer) & Tolis (Guitar) ~ Both pictures by Justina Cesnauskyte

It is always good to review enjoyable events and the first occasion I saw E-Mute perform live is no exception, living up to my expectations.

E-Mute were the final act on stage out of 4 bands playing that night at the creatively designed ‘Underbelly’ club near Old Street- great ambience for the occasion! This was only their fourth ever gig as a new band and they got off to a confident start; the quality of their music apparent despite the poor sound engineer whom I am told had a plethora of red lights flashing across the club's ‘top of the range’ equipment! Give thanks for enlightenment as to the reason behind the continual sound distortion!

Lead singer Theo proved to be a great front man and interacted very well, particularly with Tolis who clearly enjoyed himself. Theo’s sense of humour also shone along with his stage manner as he engaged the audience. The band got off to a great start opening with a lively number, ‘Clock Moves Forward,’ introducing us to E-Mute’s alternative rock style. Most of the tracks they performed were off the EP including, ‘Flying’ which I was excited to hear having informed you all that it is currently receiving radio play. Other songs included, ‘Illusions’ and ‘No Tomorrow,’ with my favourite being ‘Across The Sea.’ 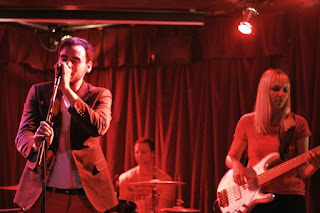 Having interviewed Theo I understood completely how the band are growing from the performance aspect. They still need to develop their personalities a little more, enabling Darren (Drummer) and Svetlana (Bass Guitar) to build more audience rapport & interact easily amongst themselves; which will no doubt occur naturally as the whole band persona develops. Of major importance at this time is the music and I can genuinely say I was very impressed.

The song I wish to focus on is ’Across The Sea.’ This is currently on E-Mute’s website as a piano solo and I was thrilled to hear it meet its potential when executed as a rock song, elevating to a new and appropriate level. The audience demanded this song as an encore and I have been reassured that E-Mute will be recording the full rock version... something to look out for and once you have heard it, it will remain in your head for???? long!.. ‘It’s only me’ Jaz hums!!

If you are a great performer or have had an interesting career that is an inspiration to others contact itsbraap@live.co.uk
'Underbelly club' e-mute';'theo makaronis';Tolis Zavaliaris';Darren Ashford';'svetlana vassileva'