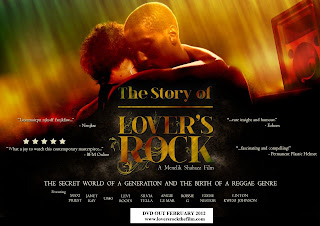 It was great catching up with Menelik Shabazz, writer and producer of the film, ‘The Story of Lover’s Rock.’ Menelik is an incredibly determined person who managed to fund his films through using a great deal of ingenuity accompanied by a direct approach. It was really interesting finding out more about this remarkable film maker and his latest project certainly catches the imagination!


Menelik, I see you were born in Barbados, at what age did you come to the UK?
I came to London from Barbados when I was 6 and was educated in the UK.

How did you become interested in film?
I got interested in film by chance. I was expecting to go to an art college and failed one of my exams so went to North London College to retake. Some guys came into one of my classes with new Sony Porta Pack video equipment which at the time was a revolution in technology. It was the first time you could freely access video equipment, the previous equipment being heavy duty, so it really opened the door and that is how my interest developed.

You seem to have great social awareness, has this always been the case?
Yes, at school I was a radical at the age of 14 and got involved with activists all the way through my education. As a child I was influenced by people like Malcolm X, where the name Shabazz comes from and the Black power movement. I continued my involvement right up until I started to make films. 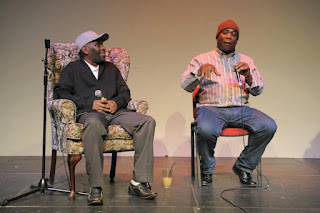 Making films was a very positive way to channel your feelings and the issues you wished to address. You did quite a few documentaries initially didn’t you with youth. Can you speak about these briefly?
That’s right. My first film was, ‘Step Forward Youth,’ which was a way of channelling my frustration at the way young people were treated by the police, but mainly the way they were portrayed by the media who projected them as criminals. That was the theme of the mid 70’s and it’s still the same nowadays.

How does the fact that there has been so little ‘real’ progress in that area make you feel?
All the struggles and the time we have put in over the years caused some changes to be made. We are no longer agitated but the fact that our young people are turning inwards is disappointing and very disturbing for me, especially in view of our constant struggles.

Let’s consider your film ‘Burning an Illusion.’ This was well received and in a way the story follows a similar theme by considering a woman who is failing to face reality isn’t that right?
Yes, all my films reflect some sort of social or political reality by way of message or information.

I haven’t seen the film ‘Burning an Illusion’ but the process of ‘finding your identity’ is something a lot of people from different backgrounds can relate to. It is a striking issue across the board. Is that partly why you chose it?
Yes, the question of identity is a universal subject and it is contexted into my story. It’s a love story as well so the boyfriend also goes through a transformation. Sometimes I go to colleges and universities where the film is screened as part of the students’ curriculum and I have taken seminars based around the film. I am happy that people still see it and a whole new generation has been introduced to the film. Now people can watch ‘Burning an Illusion,’ free on the internet and they can Google it. 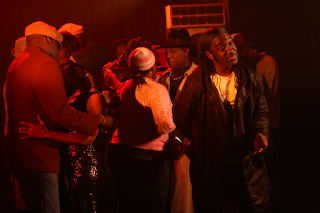 RIGHT: Scene from the film The Story of Lover's Rock

Moving on to the film ‘The Story Of lovers Rock,’ I gather that was inspired by a show and the people I have spoken to say your film has had a tremendous impact, taking them back to the good old days where people were united through Lovers Rock. Do you consider it to have a cathartic effect?
I hope so because it was intended to! The music and the humour were intended to connect with people’s hearts and open them up essentially. That was its purpose.

In what way do you think that ‘The Story of Lovers Rock’ will embed itself in Black British History?
This is our story which has never been told which is an important part of British music and social history. The film has opened our story for generations to come. Just like BIURNING AN ILLUSION.

Your representation is very skilful. I wasn’t part of that era but found myself connecting with the music and the audience. This is a ‘must see’ film. How can people get to watch it now?
It is out on DVD and people can get it from various outlets including HMV, or go online via Amazon or our distributors Verve. It has been screened nationally in over 28 venues including Birmingham, Nottingham, Bristol, Sheffield, Leeds, Luton and Reading. In London we were able to get the film in mainstream cinemas (Odeon, Vue, Cineworld.) There are new screenings coming up all the time and the best place to source information is via our website ( www.loversrockthefilm.com) as well as our Facebook page (The Story of Lovers Rock.) The film was initially screened here in the UK but is extending so there are also screenings happening abroad as well.

How did you manage to fund the film?
It was a major challenge getting money to fund the film and I had to rely on different resources. I decided to make the film without relying on traditional people for finance. My whole approach was to lean on the people that I knew who could come in and work a certain way. That included working with talent behind and in front of the camera as well as digging into my own pocket. We also had a rough cut screening where I was trying to raise money and as a result some people donated small amounts of cash on the back of that. We had EDF Energy come in at the end with some cash for the marketing. It’s one thing to produce a film but to get it out is like a record really! EDF Energy’s contribution was critical to us really. Essentially the journey was a case of digging into my own resources to make it happen.

Can you give us specific examples of people who helped with the project & in what ways they helped?
There are so many people who helped to make this film possible. My cinematographer Ian Watts deserves a lot credit because he gave up his time for the project, and then there are the people who gave their donations, the venues we used, those people who we interviewed, I could go on and on!

Years ago you managed to get funding from the BFI. How did you achieve that?
That was for Burning an Illusion in the 80’s. I was just lucky because they liked the project and it was a question of being in ‘the right place at the right time,’ so they put money into developing it. I have had help financing most of my films as I have done stuff with Channel 4 and the BBC over the years. The Story of Lover’s Rock was my first film since my very first film where I have had to dig into my own pocket. You could say I have come full circle.

Is the lack of funding to do with the recession?
No not really. It’s just the changing face of the film industry. This is my first film in 14 years and last time it was simply that my name was passed on for a project. A lot has changed which is why I left the industry. It was the frustration of not getting funding for my projects. 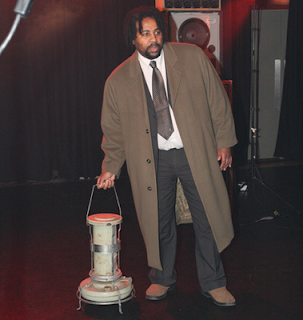 RIGHT: Scene from the film The Story of Lovers Rock

What is your next project?
It is a theatre piece that I am doing called, ‘Life and Death.’

That is a very interesting title. In what ways are you specifically looking at life and death?
It is really a story of a young man who is killed and who is taken into the spirit world of the ancestors. He is introduced to different challenges and information. The play is about how he is transformed and how through his journey he gets to hear his story. The story is of his roots, the anger that is in him and where it comes from. He gets to meet different people along the way including Pharaoh, Tutankhamen, Queen Nefertiti, Arkhenaton, Malcolm X, Martin Luther King.

That is a very unique way of pulling different aspects of history together.
Yes and it includes humour combined with song and dance to break it all up; that’s very important.

Do you have a project completion date in mind?
Yes, I want to have it ready for October. The script is almost written and I have cast it already.

Why did you decide to do it as a play- is it more effective?
Doing a play is cheaper. I would like to do it as a film but it will take a longer time to get together, so I thought I would do a play and develop it from there. Initially I wanted to do it in America first because I have interest in American; however I am here. It will go there because it is the type of play that lends itself to a different cast.

So who have you actually cast?
I have cast quite a few people but I will do a reading when I get back from abroad.

Is your play designed to include young actors?
Absolutely. The main character is young and there are other parts for dancers and singers. There is some brand new talent I want to add to it. I am very impressed with Iyaana and want to work with her as she is very talented. The intention of the play is to make it an inter-generational project.

How are you sponsoring it?
It’s the same principal as the Story of Lover’s rock- so if there are any interested sponsors out there get in touch!

Its Braap wishes to thank Menelik Shabazz for giving us such an informative interview and wish him continued success. We are very much looking forward to seeing ‘Life and Death’ later this year.

Here are links to check out his recent venture ‘The Story of Lovers Rock.’
WEBSITE: http://www.loversrockthefilm.com/