Everybody Dreams on BBC London News... WATCH THIS SNOWBALL ROLL!!


HOW FANTASTIC IS THIS? ~IB~ introduced our Braappers to 'Everybody Dreams'- a great project- last week and are thrilled to see its most recent event- the first official performance of the song to invited guests including the Mayor of London Boris Johnson, make the 6 O'Clock news.

The whole concept behind Everybody Dreams is inspirational and the project has had massive support throughout. Now the team from Gladesmore School are pulling out all the stops to drive this project forwards. Firstly they had the dream> next they produced the goods as in the song Everybody Dreams> now they are getting to grips with some serious promotional moves. Everyone I've met so far has just loved the song and now you have an opportunity to hear it and share Boris Johnson's experience by tuning into the music and getting to grips with the strength of feelings and pride that these young people share. 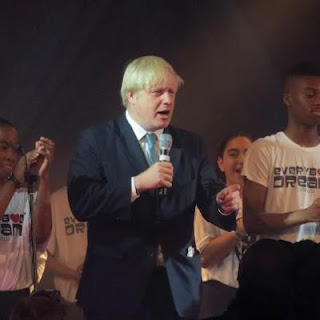 How sad is it when Kimarne says that if people see Tottenham on his CV it will affect his opportunity to get a job? This may well be the case and shows that these kids are realistic and have an understanding of the current political climate; promoting their roles to that of Ambassador's for Tottenham and Young People in the UK. The youth are frequently blamed for the riots but let us not forget that the rioters were not just youths but many frustrated members of society.

Moving on from what's past we'll consider the future. Everybody Dreams has mega support from celebrities within different musical and entertainment genres who will help to spread the word. Boris Johnson, during his visit to Gladesmore School, suggested that the BBC use Everybody Dreams as their theme song whilst covering the Olympics... a powerful and refreshing proposition... Infact, Boris was so taken with the song that he can even be heard singing it on this video.. hmmmm prefer the kids!!

~IB~ is highly supportive of this campaign and we are asking you to share the link and join Everybody Dreams!! https://www.facebook.com/pages/Everybody-Dreams/301257866615145