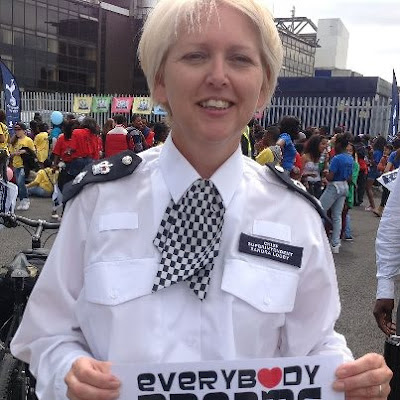 ~IB~ are thrilled to be the first people to present photo's of Haringey Police Borough Commander, Sandra Looby showing public support for Everybody Dreams- along with colleague, Chief Superintendent Dave Grant. They attended the the whole school march of around 1000 children to Tottenham Hotspurs Foorball Club this Tuesday to launch the single Everybody Dreams. The children stopped to lay a plaque for posterity at the now infamous Carpetright Tower that is symbolic for being burned during the rioting.

It is wonderful to see that these school kids have inspired such a vote of confidence in their determination to spread positivity throughout their local community and beyond. It can be seen as a step forwards that encourages mutual respect and appreciation between the police force and young people who are proud to be active members of society. Without being corny, these children are the future, they do not accept their situation and instead are actively trying to make changes and spread enlightenment~ reminding us that it is not where you come from that counts, it is where you see yourself going. 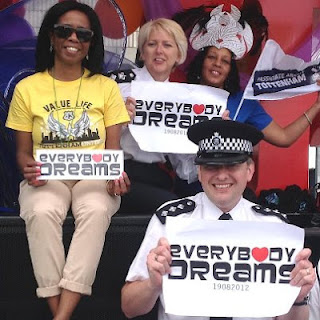 LEFT: Chief Superintendent Dave Grant
Marcus Galloway, promoter for Everybody Dreams is currently in talks with many different genres of society including the arts, sports, retail and more. It was his idea to involve the police. 'I thought it would be fundamental to the cause to get the police involved at an early stage. We are thrilled to have Haringey's Borough Commander on board however we are not stopping there, our ultimate goal is the Police Commissioner.'

Everybody Dreams is a charity single that will be available for download 19th August with proceeds being channeled into the local schools to improve the learning environment and stimulate children's interest in education. We must remember how important our environment is and it is true to say that Gladesmore schoolchildren have really been blessed by the vision their headteacher and staff hold for them.

~IB~ are also encouraging you to be ready for the Everybody Dreams 'FLASHMOB' which will be a record breaking attempt~ details currently unavailable however there is some information on the Everybody Dreams Facebook page... don't forget to check out the school website, link to the right of this page.

The Everybody Dreams 'snowball' is getting BIG with more new videos coming in constantly and creating a backlog so to speak!! We are still waiting to see whether the BBC will be using the song as an official tune for the Olympics... A thought... why not go to their facebook page or twitter and DEMAND IT!!

~IB~ understand the significance of this project and are blogging with a passion. We will still be bringing our usual selection of posts but at the same time encourage you to be a part of Everybody Dreams. With the project constantly evolving more great news will be coming your way so stay tuned!!