RIDC... SPECIAL EDITION!! READ ALL ABOUT IT. 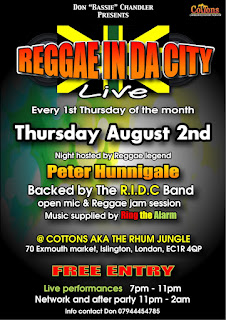 Sharing the latest from RIDC!!

Bless up You Guys.

Looking forward to seeing you at the next RIDC event on Thursday August 2nd 2012 at Cottons. As usual we will have featured guest artists alongside audience participation and all kinds of musical madness going on “In ‘ah’ Reggae” style backed by the Supa Dupa RIDC BAND.

As it will be the 50th Anniversary of Jamaican Independence we will be celebrating the event by performing Jamaican Classics from artist's like Dennis Brown, Bob Marley, Jacob Miller, Freddie Mc Gregor, Marcia Griffiths (I think you get the idea!)

the choice is yours!!!

If you have a friend who can sing, bring them along too! Come and share your musical vibes at Reggae In Da City. This months show (July 5th) was a complete blast, madness if you missed it! Reggae In Da City is the No1 open mic Reggae session in London if not the UK right now so make sure YOU are a feature at this very much entertaining show.
Anyway nuff love for now and we shall see you there.