Everybody Dreams~ massive support & media coverage for the flashmob!! 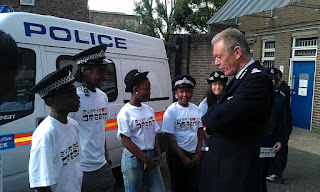 Everybody Dreams left the ‘dream’ phase long ago and has clocked up a pretty impressive string of realities. Those of you who have been following the Gladesmore Community School journey will know that this single is having a huge impact in creating a new, positive view of the borough of Haringey following last year’s Tottenham riots. ‘From strength to strength’ has proved to be a reality firstly by the support of Tottenham Hotspurs FC, Mayor Boris Johnson and most recently by the attendance of Metropolitan Police Commissioner Bernard Hogan-Howe at the Everybody Dreams Flashmob appearance this Monday, 6th August- a year after the riots... along with other representatives of the force including Borough Commander Sandra Looby who is showing continued support. How wonderful it is to see the police standing by and even joining in a little with such an original initiative. 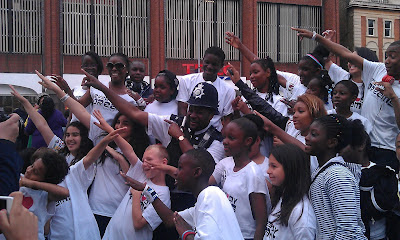 The school has over 1000 pupils however it wasn’t possible for them all to attend so Monday was the turn of the dancers! Traffic stopped with prior agreement from the police for a total of 6 minutes to allow the children to perform their routine. Once it started Everybody Dreams was definitely the focus of attention; besides the crowd, shoppers peered out of the local Tesco and people were literally jumping off the buses to catch the action whilst the drivers waited for the road to clear. To the surprise of the teachers, French TV reporters rushed over to grab the story which was also aired on radio & BBC TV. An even greater surprise was in store an hour later when CNN turned up at the school having got wind of the story!!! Everybody Dreams also featured this week on The Voice on-line who are calling for us all to rally around and show support... so why not go to the Gladesmore School Soundcloud and download the free ringtone right now... also available on the Its Braap Page opposite... or share the videos to spread the word. 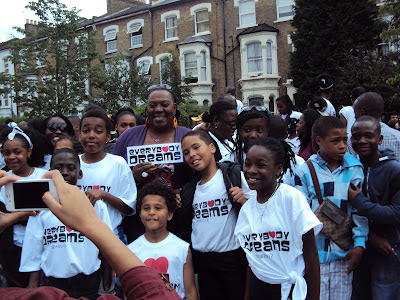 ABOVE: Flashmob with Pauline Pearce
The most amazing thing I found was the electric and yet peaceful atmosphere that dominated Tottenham on this occasion. People went out specifically to enjoy the Everybody Dreams experience which contrasted totally with the scenes last year and shows you how the real Tottenham inhabitants feel. We will follow this article by posting the flashmob video and you will see the familiar face of Pauline Pearce now telling us how it is a year on... how many of you remember the viral video in which she gave the rioters a piece of her mind?!?! This occasion provided a great opportunity to meet the people who are involved in the campaign, including recent recruits- Arriva bus team... more to come there... and especially the most humble person of all, the Headmaster Mr.T.Hartney CBE otherwise known as Tony! 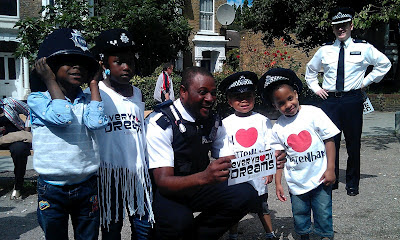 ABOVE: Tottenham the next generation!
Stay tuned... more great news still to come & check out the link to the Everybody Dreams website top right!!

If you would like to write an article about your dreams for Its Braap~Its Life contact us on itsbraap@live.co.uk We would love to hear from people who have also reacted positively to the riots!