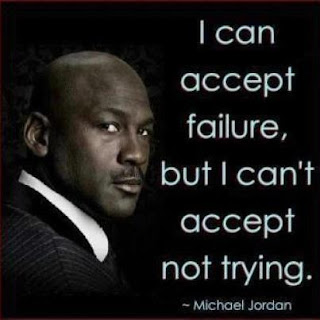 The Olympics are well and truly in full swing and with them the shock story of the Women's Badminton Doubles disqualifications, giving a new slant to these great words of Michael Jordan's. Clearly Michael is speaking about life in general and also as a true sportsman. So, what were these badminton players and their coaches thinking of when they deliberately sabotaged their own well loved sport? What glory would they have really had in winning if they had evaded disqualification knowing that their success was grounded in deceipt and trickery rather than true brilliance? In addition they must have had no consideration whatsoever for the poor audience who had spent their hard earned cash and many months looking forward to witnessing some of the best badminton in the world. Selfish in the extreme.

The good news is that their plan did not succeed and as a result one of the players, Yu Yang, has quit the sport.

Thankfully there will be many Olympians who will have tried their hardest and walked away having played their sport honourably and as a result be able to hold their heads high with pride despite not winning a medal... On top of that we have the medal winners who have given some truly stunning and memorable performances... as for the above 8 badminton players, they will never live down their disgraceful conduct and have lost their opportunity to go for gold!

If you have a great story relating to the Olympics contact itsbraap@live.co.uk
Posted by ITS BRAAP ITS LIFE !! at 21:49