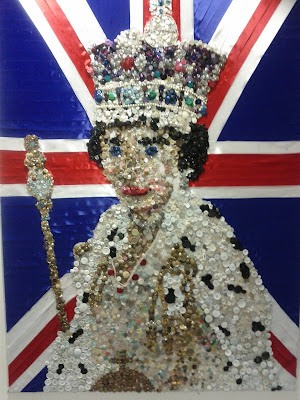 This is an unusual work of art currently on display within the Croydon Clock Tower. As you can see the concept is very interesting- the brain child of Hannah Payne, created with the help of Daniel Richardson and Elaine Monteith together with pupils from the New Life Christian School.

This work of art goes a lot deeper than simply Queen Elizabeth 2nd being depicted as a collage of buttons. The buttons have been supplied by the community and evidently each button has its own stories from travels during the Queens reign. Wouldn't it be fantastic if buttons could talk!

When you think about it the concept is fascinating. Many of us have well travelled garments, some with buttons that we may have worn to the Queen's recent Jubilee celebrations. This could form the basis of an amazing project if some of the stories were actually told- with a numbered picture grid to refer to positioned next to the collage for instance!If you are artistic you could even make your own button timeline... now there's an idea!

Back to the Queen- this work of art has been beautifully constructed with great attention to detail leaving me wondering what the long term plan is for it? Maybe it should be presented to the Queen when it leaves the Clock Tower and put on public display in Buckingham Palace!