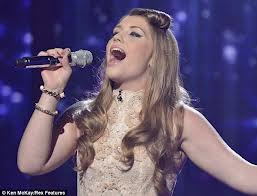 ABOVE: Ella Henderson
WOW the X-Factor results last weekend shocked everyone and especially the judges when 2 of the hottest contestants- James Arthur & Ella Henderson, landed in the bottom 2, thereby having to compete against each other in the sing off. The judges were stunned and didn't really know what to say. Most of their comments went over my head however I do recall someone saying it was ridiculous and Tulisa expressed the age old view that the public were clearly voting for the wrong people and had made the mistake of assuming that their favourite contestant was safe; thereby implying that they had voted for the less obvious singers.

I am not so sure that this was the case and will use this opportunity to express a different opinion. Whilst watching Saturday’s show I was contemplating the fact that Christopher and Rylan were still performing and clearly had the public on their side. With regard to quality singing this is a surprising outcome. Over the years the trend for the British public to support the under-dog has become apparent leaving many people convinced that the voting is rigged. For arguments sake let’s assume that the vote is a true reflection of public opinion, the question then becomes, ’what opinion are the public expressing?’ We have witnessed many altercations amongst the judging panel, experts in the industry, who at times have succumbed to ‘playground talk’ making snide personal remarks towards one another that have no relevance to the competition. This does not create a good public impression. In my opinion the only judge who has maintained a good sense of decorum is Nicole who avoids engaging in conflict and has a positive approach overall.

This year I hold the view that Gary Barlow’s domineering approach and attitude towards the public vote has not worked in the programmes favour. Gary was furious when Louis saved Rylan in the early stages of the competition and the final result was decided as a result of the public vote. The public voted Rylan in and Gary could not believe it, becoming more enraged cleary ignoring the fact that the public pay to vote and tune in each week- therefore having a right to watch the people they support perform. If people love to watch Rylan put on a show rather than listen to a quality vocal rendition that is the public's choice for their Saturday evening viewing... even Robbie Williams loves Rylan's showmanship and Christopher was the wild card, the public clearly connecting with him. 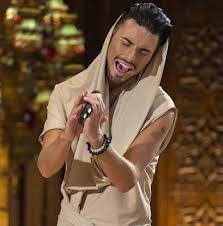 RIGHT: Rylan performing on the X-Factor

Last week we lost the extremely talented Ella Henderson, very unfortunate as we now have an all male competition since Tulisa has run out of acts; never mind she won last year with all girl group 'Little Mix.'

Time to get real!! The X-Factor will only run as long as people are prepared to watch it and pump up the income through text votes and uploads, therefore it is time for the judges to show a little respect towards public opinion and reign their personal feelings in.

Ultimately there can be only one winner so even at this stage if the voting had retained the best vocal performances, quality singers would begin leaving the competition shortly. Next year the judges might need to give more consideration to the contestants who go through to the live shows, however there has to be an entertainment factor to grab the public interest otherwise the programme might fall flat becoming a forum for unengaging earnest hopefuls!

At this point in the competition the best singers will undoubtedly be offered recording contracts and have a future in the music industry so we will definitely hear more of 16 year old Ella. The probability is that James Arthur will make the final and I expect Jahmene and Union J will reach the final stages too... but just supposing by some twist of fate Christopher or Rylan actually win? To the public it’s just another year and to the music industry, a little spoke in its eternally spinning wheel. Final thought: why on earth should Christopher or Rylan feel guilty about anything? They are keeping their supporters happy and that is the exactly what we expect of them.

We have a very good readership, so if you would like your work featured send your articles or poems to: itsbraap@live.co.uk