December 14, 2012
Jack & The Beanstalk~ all photo's courtesy of Paul Clapp 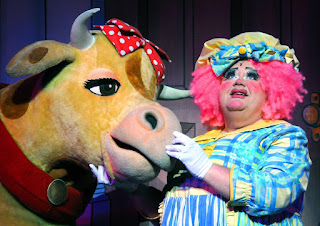 Once again it’s the season for goodwill and pantomime. Being a kid at heart, I was thrilled to go along to the Fairfield Halls and watch their fabulous, fast moving and hilarious panto, ‘Jack & The Beanstalk.’ Loved it and can now say that Christmas has officially started.

Expertly written and produced by Paul Hendy & Emily Wood for Evolution Pantomime, this panto was filled with traditions from beginning to end including all the classic characters & finishing with goodie bags for the brave children who graced the stage prior to the grand finale; as essential to panto as the story itself. The traditional story was supported with ‘hot off the press jokes’- SHAMAZING- which rolled off the tongue all night long to the delight of the audience who were busy counting the ‘Tamara’ jokes as instructed!! The Tamara jokes combined with countless cheese jokes, added a new individual flavour created by the company... and just when you think you’ve heard them all, up pops another one- a clever switch indeed as Fleshcreep the 'baddy' had the final laugh! Which leads us nicely to the characters!!

Have to say that the casting was spot on with everyone giving a brilliant performance. The ‘Vegetable Fairy’ played by Laila Morse (Mo in Eastenders,) was first on stage and warmed the audience up instantly, setting the protocol for the evening and delivering a clever spiel of rhyme; Laila's London accent making us all feel at home! As with all great pantos, naturally we experienced the fun peculiar to both drag and the classic panto Dame, with Quinn Patrick as Dame Trott. Patrick did a fantastic job being hysterically funny with a natural sense of timing which milked the audience anticipation, especially when he developed an enforced 'rapport' with audience member, John... Dame Edna Everage without the Gladioli comes to mind here! Dame Trotts costumes were great, literally wearing the garden... as all the costumes & scenery were on point, big up to wardrobe, set and props here people- fit for the West End. 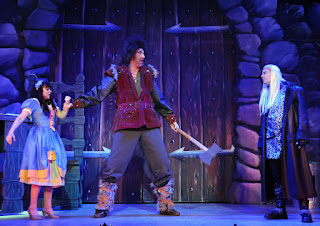 The children were excited by the entrance of Sid Sloane, CBeebies presenter, who was very at home playing Jack and had a natural way of pulling the characters together. Sid had the fun job of climbing the inflated beanstalk, wired for something other than sound! Must slip in that the sound was exceptionally clear and did great justice to the singing- in fact, when Gemma Sutton, playing Princess Tamara, sang, ’When a hero comes along,’ you just knew she would have passed her X-Factor audition with great comments- an excellent rendition. The chorus, which included several children, worked very hard all night and produced very good song and dance routines, working through new and popular re-worked songs such as ‘Cow wash,’- Great to hear that old Rose Royce number used expertly to compliment the story. 'We buy any cow.com,' was both a surprise & great take on the jingle... in fact it was my highlight of the night & I still giggle when I think of it!

Herbie Adams played Jack’s brother Billy Trott and was responsible for delivering a multitude of jokes, many of which were directed to the adults keeping us on our toes. Herbie also bore the brunt of the slapstick comedy being deluged a few times with ‘milk’ in Trott’s Dairy. Sadly for the Trott Family Daisy, the family cow, was kidnapped along with Princess Tamara by Fleshcreep, Jay Worthy, whose deep, snarling voice may well have left a few children trembling in their seats whilst booing him! It was quite literally a HUGE moment when all 7’7.56’’ of Neil Fingleton, pantomime giant, finally strode onto the stage and addressed the audience in true fe fi fo style- great snoring job there too! The Giant’s Kitchen worked very well ans hosted a novel element of audience participation enjoyed by one and all which neatly led to the conclusion of the story. 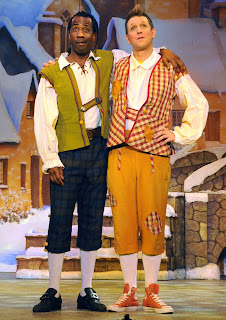 Gareth Williams (The Flying Pickets) played the King who was forced to tax his subjects insanely and almost lost his wealth. As King, Gareth came up with the novel idea of creating Trott’s Dairy as a business proposition and following the rescue of his daughter Princess Tamara, happily gave Jack her hand in marriage by the end of the show. In fact there were several marriages and sadly the baddy Fleshcreep was turned into a goodie... sigh, typical of today’s modern thinking- can’t upset the children anymore and leave them with nightmares!! Bring back the Brothers Grimm! All in all it was an amazing evening and I would recommend you to get on line and book your tickets now, otherwise you will never really know what you were missing! 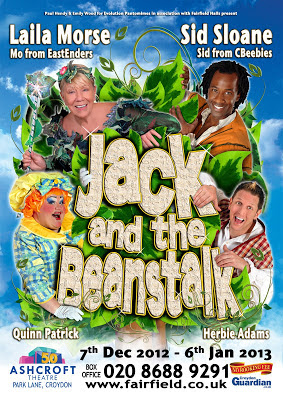