Talking Drumming? The name that springs to mind is Lenny Kravitz drummer, Royalprince Franklin Vanderbilt... name courtesy of his Grandmother and with maximum charisma as such a regal title suggests!!! For the ease of writing let’s just stick with Royalprince's preferred mode of address: Franklin!

Why start with personality rather than talent? Because personality is as important as talent & Franklin has bucketfuls of both. Franklin is a people person and emanates welcoming vibes which must have aided his musical journey. In a small way, Franklin has proved influential in my life, the little piece of advice he imparted when we met, back in 2008, came to fruition!

The poem below was written to go with the performance I have just blogged, following which I met Franklin! Miracles do happen!

We will uncover more of Franklin's story this Saturday, and look forward to posting one of his songs. 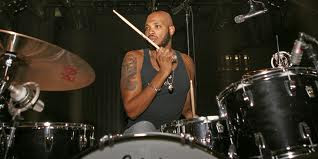 Audience on fire
Place in total uproar
Whistling, hollering, clapping
Applause to the roll of the drums
Reverberating, sound cascading
Multiple rhythms driving
Beating out their moment of glory
All eyes focused unblinking
Drinking in the Master of his art
Virtuoso playing to perfection
Head high and bopping
Reminiscent of a peacock
All glory displayed
Teasing the throng!

No poor little soldier boy
Pur rup a pum pum
Somberly awaiting his king
PURRR UP A PUM PUM
Witness the percussion King
Seated on his stool of a throne
A glistening array of silver and gold
Shimmering at his fingertips
Responding to every command
Let the drum sticks ROOOOOOOOL
Flying deftly between cymbals
No time to pause as the solo glides along
The Fury of trained energy unsprung
Drumsticks fly free across the auditorium
Yet hands and feet play on
The roar of intermingled sounds
Rolling until with a final clash
The rhythm’s done!