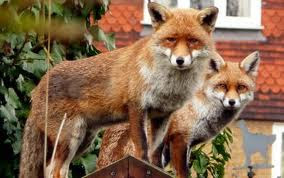 I thought it might be good to look at ordinary everyday incidents- the kind of thing we pay little attention to yet they contribute something to our day; so here is the first of the year. Feedback always welcomed!

It's the first day at work after Christmas and the children came in with smiles on their faces instead of the usual ‘first day back’ tears... what a blessing! After breakfast, while the children were playing happily, we spotted a couple of foxes out in the garden... cheeky urban foxes are not ideally suitable as playground pets are they!! With that thought in mind we banged on the window, so they looked up to acknowledge us and continued their nonchalant stroll around the premises. Gemma banged again and this time the largest took note & leapt up & over the brickwall, disappearing the other side. Not so with the slightly younger one. He peered at us and stared at the wall, did nothing and looked back at us once again... NOT GOOD! Gemma flapped at him, so he moved towards the wall, looked, stepped back, looked at us and stood still. I turned to Gemma & said, ’that darn fox hasn’t got a clue how to jump back over that wall!’ It continued prowling around the end of the garden, looking mournfully at the wall while Gemma carried on making a noise. Fox gave up and stood still once again... maybe we need to call the RSPCA, after all, we can’t have a fox stranded all day!!

I thought about it again and said to Gemma, looks as if we need to put that table close to the wall so he can get a leg up so to speak.’ Gemma replied, ‘and who is going to go out there and move the table?’ I was quite happy to do this, being fearless of foxes however Gemma decided to try ‘encouraging’ him again. ‘You can do this fox, you know you can!’ Foxy spotted a slightly different angle & miraculously managed to jump up and teeter unsteadily on top of the wall whilst attempting to stare at us... ‘go on, jump down,’ Gemma yelled & suddenly he came to his senses & leapt into the neighbours back garden... we have quite a few neighbours along that stretch of wall & a few urban foxes to go with them... help, BBQ chicken bones left as presents on our lawn in the summer months!

No doubt the dreaded foxes will return but it was quite an interesting interlude and one that the children showed zero interest in... I guess they were all very happy having their playmates back. Nowadays we all know that foxes have become very brave and although not domesticated are generally quite unconcerned about us humans. What I enjoyed was watching the fox attempt to solve his problem and the way he seemed to be looking more for help than displaying any other emotion. Obviously we are aware that the increase in urban foxes is worrying and a great topic for debate however they cannot be avoided and have become very much a part of London life. Our local foxes have never ventured close whilst the children are in the playgrounds but are quite brave when we are all indoors and obviously aspects of their presence are included in the risk assessments, another modern day essential.

If you have an interesting animal story or views on urban foxes that you wish to share please contact us!!! itsbraap@live.co.uk