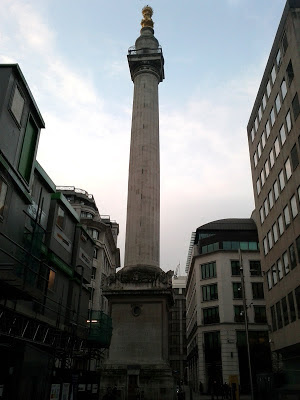 I love London and there is a great deal you can do here for free or next to nothing! A journey up the Monument is one such activity at the grand cost of £3 per person. Not a lot of money to climb the 311 stairs and step out onto the viewing platform, 61 metres above the ground, as a reward for your efforts.

The Monument was built as a memorial to the Great Fire of London which had wiped out the majority of the Medieval City of London, located within Roman walls. The fire started in a bakery in Pudding Lane Sept 2nd 1666 and raged for 3 days; it is exactly 61 metres from the Monument... very specific placing, reflected in the height of the Monument. Interestingly, as there was no such thing as a fire department, 12 Fire marshals were appointed to make sure the city was re-built as speedily as possible. They did such a good job that portraits were painted of them and one hangs in the Guildhall art collection to this day. Part of the reason that the City needed to be re-built quickly besides essentials such as trading, was due to the rumours that the fire had been started by foreigners and as a result violence and looting erupted... not much has changed with the passing of time has it
. 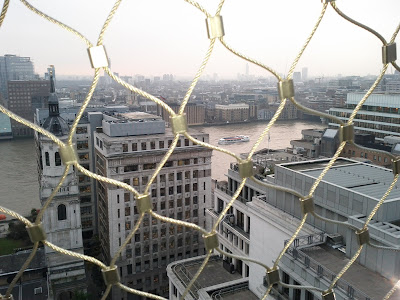 ABOVE: View form the top!

The Monument was designed by 2 people- Sir Christopher Wren and Dr. Robert Hooke, taking the form of a colossal Doric Column containing a canti-levered stone staircase which fortunately has several windows providing substantial ledges where you can sit when the legs are threatening to give way! Big thanks here to my friend for his patience!

After climbing the Monument we went to a nearby church and felt blessed to see pictures showing views of London back in the day enabling us to compare the increase in the height of the skyline from time passed. These days the Monument isn’t impressively tall however in its day it was one of the tallest buildings around and you could see great views across the city. In addition, from the viewing platform you are able to peer up at the copper urn with emergent flames- it was necessary to crop this photo so that it is clear. 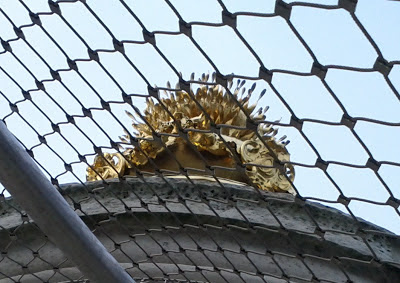 I think that the Monument is the perfect representation of the post-fire era and a beautiful tower. It also represents a turning point and is the image I am taking forwards with me into the New Year. The Monument isn’t a symbol of hope, it is more a tribute to the excellent skills and hard work required to overcome one of the most devastating events in the history of London and the speed with which normality returned.