Whether the Weather!~ Its Just Life!! 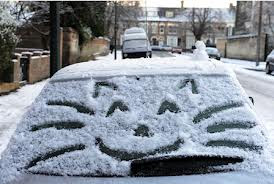 Here in the UK we have been bombarded with snow- as predicted accurately by the weather man! Just goes to show the improvements technology has achieved... yes we all remember Michael Fish’s prediction being laughed away by the storms of 1987 in the unreliable old days!!

Snow is refreshing, at least when it first settles. I find it gives not only outdoors a new look, but also my kitchen due to the glass lean-too being severely darkened under the weight of snow... an eerie indoor light at best. It has a strange effect, making the room gloomy & cold regardless of the heating. I find I spend less time in the kitchen preferring to work at the front of the house which is distinctly more cosy in such conditions.

Here in the UK we are known for our intolerance and inability to cope with snow, the country slowing down if not grinding to a halt... especially public transport that is! For some reason, usually we don’t quite get it right, probably because incidents of severe weather are very few and far between. This year we have improved although many people left work early to make sure they could return home with comparative ease & some schools were closed for the day. On the positive side we are still operating some flights so maybe the learning curve is less steep.

I was very lucky to purchase a great pair of boots just last week having looked around for quite a while; a definite blessing, even giving me the opportunity to try them out! And my son was practicing a new skill, carrying a metal chair a few streets through the snow so that he had somewhere proper to sit round his friends house!! What can you say to that?

I think we are fortunate with our weather compared to many countries. This is because we do not suffer extremes, unlike many places who experience droughts or hurricanes, so time to be thankful- and after some rain & more snowfall I am sure we will be back to more even temperatures. One thing’s for sure... no hot temperatures this January!

So what lesson can we learn from this? I think the good old fashioned 'Be Prepared' is quite useful and stands us in good stead across the board.