February 10, 2013
1 Timothy 5: V1+2
‘Do not rebuke an older man but encourage him as you would a father, younger men as brothers, older women as mothers, younger women as sisters, in all purity’ 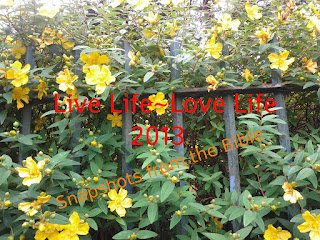 These verses were selected randomly and strike me as a great example of a very old fashioned command. Yet, at the same time, it puts family relationships back in the centre of our daily lives and emphasizes respect for all people, promoting it as good practice.

How often do we speak to friends, colleagues and strangers with more courtesy than we use at home? It can be hard to remain polite when you are exhausted or worried and dealing with constant demands. You may have serious business or financial worries. Having dependents can be very hard work whether they are younger, elderly or have specific needs. The good old fashioned ‘taking a breath and counting to ten,’ can allow enough breathing space to allow you to deal with a difficult situation in an appropriate manner.

When out and about, sadly there are many occasions when we witness parents shouting and even swearing at their children and also high levels of bad language between school children or other groups of people. This has become the norm amongst some people and is a reflection of poor communication and a lack of respect.

The word ‘rebuke’ is very old school and no longer in everyday vocabulary. We have replaced it with the blanket version, ‘discipline.’ Either way, we are told to ‘encourage,’ which is to use a positive approach and still in line with modern thinking. Psychology teaches us that the gentle but firm approach is more effective than shouting and ‘rebuking’ people. None of us like to be ‘told off’ and encouragement usually includes guidance to help future performance. The use of the term ‘purity’ in modern society is hard to put into any perspective so if you would like to define it in the comments please do! Pure is a very definite word and very few of us are pure in thought, mind or deed. I think society is complex and so far in advance of Biblical times although there has been a great deal of immorality recorded in the Bible and throughout history.

A thought: possibly we have more loneliness within modern society as a result of the erosion of strong family units and people are looking for ways to comfort themselves. Also, whereas immorality has always existed we are bombarded with immoral behaviour via the media- just consider the storylines in TV and films, coupled with modern realty shows. The internet has given unlimited access to gossip, dubious websites and in some cases social media are used in ways which would be considered immoral.

I think we just have to be aware of how we speak to everyone and think of the best ways to communicate important messages whether at home, work or elsewhere doing so with love and understanding in our hearts.