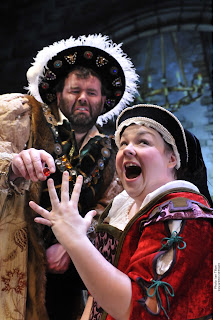 Earlier this week ~IB~ was invited to attend the live stage show of Horrible Histories performed by the Birmingham Stage Company at Fairfield Halls, Croydon. It was great fun for children and adults alike, sticking closely to the somewhat gory books written by Terry Deary which were later adapted for television.

The stage was set even before the show began, the theatre being thoroughly ‘spooked out.’ A shadowy axe swung occasionally across the screen, grabbing our attention, in synchronization with eerie sounds including the regular blip blip of dripping water- I felt as if I was locked in a primitive castle cell!

The show opened in true panto style, ‘My granny can shout louder than that and she’s been dead for 30 years!'- that line worked wonders and ensured that the audience was fully engaged! 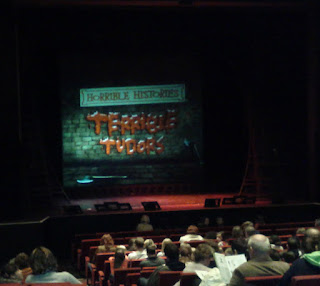 British history is packed with drama, Horrible Histories bringing it to life in an innovative way; complex bloody historical facts being easily, amusingly and spectacularly conveyed by a cast of 4 characters:
Mr Dee- Christopher Gunter, Dross- Tessa Vale, Drab- Ashley Bowden and Miss Tree- Amanda Wright, whose interactions with one another and the audience ensured a professional and greatly enjoyable performance. I certainly came away feeling my historical memory bank had been significantly re-booted!

We started by learning about King Richard III, a shrewd soldier who came to grief during the Battle of Bosworth Field in which he was betrayed, killed and succeeded by Henry Tudor, the first of the Tudors who lived in exile... to avoid possible confusion in young minds we were told that exile was not a place and King Henry VII lived in France! Must mention, fun counting games when working out the Kings' titles.

Miss Tree did her best to keep a handle on proceedings, insisting that the good side of the Tudors was shared to prevent the poor children from being overwhelmed by horrible facts ... they sounded happy enough to me and reveled in singing the song about Henry VIII’s six wives whilst portraits of the wives flashed before them... so easy to remember following such hilarity, gore and visual stimuli. The structure was well thought out as basic learning patterns were adhered to- major historical facts re-capped before moving on to the next scene. Henry VIII’s formation of the Church of England & the difference between Catholics and protestants was clearly delivered with the use of football songs and the waving of purple/gold or red/white scarves, a touch of brilliance.

Besides following the order of the monarchy in clear detail right through to Elizabeth I, no nastiness spared particularly in relation to the gruesome and long winded execution of Queen Mary of Scots resulting in a bouncing head, we were enlightened regarding common crimes and punishments along with the cures for various ailments... if you don’t know I doubt you wish to know! 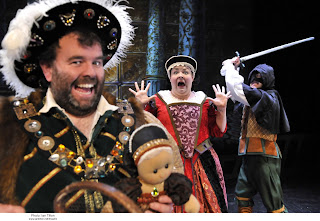 The second half provided my first ever experience of 3D theatre and it was fantastic!! Watching the Spanish Armada bopping around on the sea and avoiding the shrapnel that came flying towards us... fortunately I had glasses on glasses so did not quite receive the full impact which caused many of the audience to shriek with feigned shock, surprise and delight! My favourite part of the show was Queen Elizabeth I’s Armada speech and the portrayal of her increasing insanity- but saying that all was excellent.

Horrible Histories was well acted - kudo’s all round and let us remember to include the director, Phil Clark, understudy, William Towler, backstage team- special mention to Amazing Interactives for their 3D effects and executive producer Philip Compton. Even the programme was well thought out being educational and aimed at creating additional interest and cementing facts for our recently educated children... cough cough!

If you would like a review of your production or wish to write a review of any art form contact itsbraap@live.co.uk