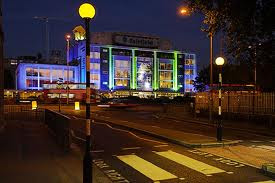 Fairfield Halls saw a record-breaking week this month with the best-selling school half term to date.

Terry Deary’s popular history lessons were seen live on stage at the Ashcroft Theatre in Horrible Histories’ Terrible Tudors and Vile Victorians throughout the week adding to a busy Concert Hall programme. This included sold-out performances by dance duo Anton & Erin and folk stars Bellowhead, whose concert was preceded by a free entry Folk and Beer Festival. The ballets La Fille Mal Gardée and The Nutcracker, presented by Raymond Gubbay, also featured in the week’s programme, and the Bond film Skyfall saw the second highest attendance for a one-night screening.

Simon Thomsett, Fairfield Halls’ Chief Executive, said “We’ve had a fantastic week and are delighted. The building has been buzzing and it’s been great to see such a strong support from our family audience through the week. There’s truly been something for everyone.”

~IB~ Thanks Laura for the update.