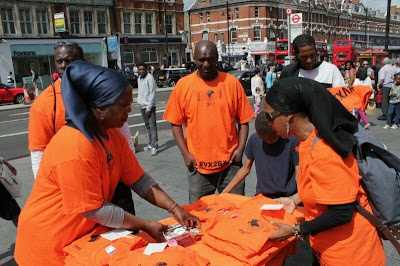 Info on the London Peace Walk


~IB~ are thrilled to have the opportunity to interview Simon Muhammad,  founder and  president of the UK Peacekeepers, prior to this key event in the history of the UK ‘s predominant Peacekeeping Initiative. ~IB~ has been out on the streets with the Peacekeepers previously and witnessed the dedication of this team who are committed to achieving peace in troubled areas.


Tell us a little about why the peacekeepers started in the UK
The peacekeepers started because the death toll in the community became too high so my friends and I were looking for a viable way to help the youth. With the biased portrayal of violence in the media, someone had to bridge the gap between what was said and what was happening.
How did you go about this?

Myself and friends heard that Captain Dennis was doing some work in America so we formulated a copy group. We copied what they were doing in America and had it in mind to invite the Peacekeepers over to help us establish the group. In March 2011 we hit the streets and started to go and talk to people.


What form does the peace treaty take?
People really liked the idea of a youth peace treaty and this is coming together in a non-political, non-religious way. What we are looking to establish is that youth in different areas, otherwise known as gangs, actually have a healthy respect for one another. 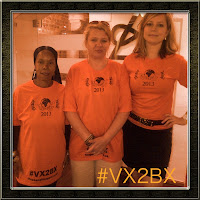 They can still have their colours, their names and their postcodes but not see each other as enemies. In order for that to happen there has to be dialogue and with dialogue we can bring about some kind of peace treaty that can help to stop the escalation of violence, especially in the summer. A peace treaty helps to decrease the violence and ultimately the killings.
So what you are saying is that you are encouraging the youth to keep their identity within their gangs. How are you going to progress onto the next step? What projects do you have to help youths establish a more individualised sense of identity and better values?
We have several programmes running at the moment and programmes ready to be established that will take a youth from boyhood to manhood. Wherever a young person is, we can help him to become a man. We will take him through the process as they do in African, where in villages they are taken away for manhood training. We take youth and teach them discipline, hygiene, who they are and what they need to know about women, finance and many different aspects of life.


Give examples of how your programmes are successful.
We see them become more responsible, more disciplined and more self-reliant. We have other programmes that help set up social enterprises that take you through the whole process. Another programme helps youths to fill out forms and it is done as part of a discipline process  so we will teach a young person how to hold a pen before writing their CV. It’s not like school and everything has gone digital now so we have the music, media and IT aspects including different software and hardware.


Can you tell us a bit about your slogan, ’Present For Peace’ and how you are actually present for peace on the streets including Brixton?
Sure. Every weekend we’re out in the community and we do what is called an, ’hour of power.’ It’s become more than that now. It started as us coming together for an hour in one area to stabilize that area and make sure that no violence happens in the area where we are. We talk to, befriend and share love with the community. That way we bring about a peaceful atmosphere so wherever we are present there is harmony and peace. We are present for peace in Brixton, Croydon, North London and Lambeth estates.
The Peacekeepers went into 10 of the so-called worst estates in Lambeth and spoke to the youth. We proved how much we are present for peace by rolling up our sleeves. We spoke to the youth and their parents, helping them to bond and build relationships again because some of us just don’t have a relationship with our mother or our father.


Tell us about your relationship with the media and other forms of external support that the Peacekeepers have been generating
Working with the media has been very difficult to be honest. We have had a few articles in the South London Press but what we have found is that when people come and want to do interviews they don’t  get off on the , ‘do good’ stuff. They want to speak to a gang member, or ask, ’has anybody been stabbed lately, we want to speak to someone who’s been stabbed?’  We have TV news channels throughout the day and you’re telling me they can’t give three or four hours a day to promoting the good works that people are doing in the community.


How do you feel that this focus on negativity affects society?
It’s crazy. How do you expect people to respect and understand that things have to change if you’re not showing them change? Evidently there are a lot of organizations doing good out there because you see some of the youth enjoying a higher level of life. They’re not all involved in violence so why not focus on some of these groups and organizations who are doing good? We don’t get no love from the media.


Do you have a specific example for us?
Yes, we did a clean- up of drug waste in the grounds of St Matthews Church.  It’s called, ‘The Peace Garden.’ But how can you call it a peace garden when there are people taking crack cocaine and injecting themselves down there. We found needles, foil, cocaine packets and cellophane with residues of marihuana, Rizzlas and cigarettes in the Peace Garden. Where is the peace in that?
We’re saying, ‘give us some air time because we won’t disappoint you with what comes out of our mouth.’ We’re saying, ‘put the spotlight on us and other groups and let’s see if people want to take that option.’ I’m afraid that if you just feed the people filth, they’re going to have to wallow in it. I believe that we can bring about peace, more peace, a higher level of peace if we focus on it. 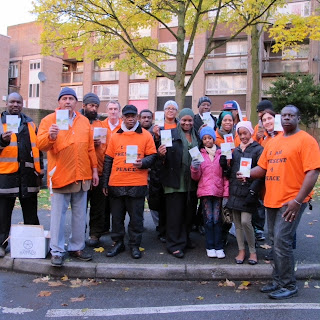 Do you have many links with schools
We were approached by a school in Croydon who wanted us to speak down there. They had a few more groups but it will be the first school we get to speak in. All of our guys are CRB checked and trained in conflict management and conflict resolution. We have some wonderful speaking females and young men who could go about the whole country speaking. As a matter of fact,  one of our great colleagues, ‘the investigator,’ they call him, goes into many of the schools teaching and training young people, celebrating young people in their greatness. We’re definitely aiming big on going into the schools because we believe in education. Education means’ to bring out from inside the individual,’ so we’re really big on it.


Where would you like some sponsorship and funding to come from and if you received it what would your number one project be?
We received £10,000 last year from the lottery and that enabled us to train over 60 volunteers.  We were very grateful for the simple reason that you can’t do much in a community that has violence in it without volunteers.  What we are finding is that more and more people want to do something but they don’t know what to do and yes we would like to attract some more funds.


You have a peace walk planned this month. Can you describe it in more detail?
We have a peace walk planned for Saturday, 17th August which we have literally financed ourselves. We still need finance for a stage and we still need banners, a marque and things like this. We would encourage people to sponsor and help. They can go to the website or email us at info@thepeacekeepers.co.uk or they can go through Its Braap (itsbraap@live.co.uk.) We do need support though, we need help. On Twitter we’re using:  #VX2BX because we’re going to be walking from Vauxhall, the VX to Brixton, the BX. Because this event has the ability to reach so many people we’re asking people to invest.


What is the aim of the peace walk?
If we can only help one kid’s life…  Just one kid who is caught in domestic violence or is violent. If we can just turn one kid’s life around it’s like we’ve turned around a thousand. One act of goodness or kindness can really help.
We can get more people on the streets and more people helping the youth if we only have the finances to do so. If people don’t want to give over finance they can donate. B&Q has a beautiful sized marquee for only £70. Sometimes the slowness to do certain things is because people are suffering. Many artists would give their time to help these causes but they’ve got their management around them, PR people- all these different people who need to approve them. I like the human factor that says things can be easier if you’re willing.


A huge thank you to Simon and please come along this Saturday and support the London Peace Walk.
Simon Muhammad's Speech for Peace
Jaz McKenzie﻿
Posted by ITS BRAAP ITS LIFE !! at 21:37