Have Questions~Have Answers #5- To be or not to be? Christian,Islam, Hindu, Pagan? 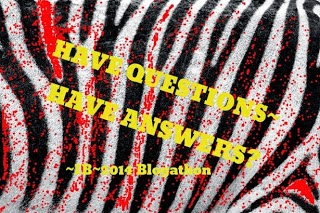 I went to church this week and the rector asked me where I stand in relation to the Christian religion- interesting. The answer is that I don't really know, having been brought up in the Church of England, had my children Baptised in the Methodist church, spent time attending the Baptist Church (who believe in adult not child baptism) and received important accurate information affecting my life from relatives who went along to a Spiritualist church. Interesting isn't it! The fact is, there are so many religions to explore and each and every one of them claims to hold the answers to life and eternal life. The truth is that they all have common denominators and fundamental differences.

Having addressed this interesting subject I have reached the following conclusion. I believe that God is a God of diversity.He created all things equal- and equally, created all things different. We are so varied from skin colour to height, muscle tone, mental attributes, that it is hard to accept that God created one religion to suit all. In fact, it seems that man created religions at God's command, interpreted and scribed His instructions in an appropriate manner.  It is totally acceptable to me that all religions may well be equally authentic and even correct in their particular beliefs given that God speaks to people both directly and indirectly in as many ways as He chooses. People are often brought up within their 'tribal (family)' religion which can be adopted for life or  they might  abandon all religious belief or convert to the religion that compels them most. Maybe some beliefs have more of an appeal than others, may be easier to understand; alternatively, might seem so far fetched that it is grand enough to be true.

To me, God is a God of love therefore I cannot conceive that only one religion 'got it right' and the chosen few are off to heaven whilst the rest of us are condemned to hell. That makes no sense when are told that God loves us equally. We do not know everything and that is my bottom line. To have a set of beliefs is very important and I believe that we are all entitled to equal consideration and respect. We are thinking people and as such, draw our own conclusions until the days comes when we are in a position to discover the truth.

Final point- not everyone believes in God and universal law is simply universal law stemming from the source.  An interesting debate and I trust that no one will take offence at what is basically food for thought.

Feel free to use 'comment' or write to: itsbraap@live.co.uk
Posted by ITS BRAAP ITS LIFE !! at 20:32