Face to Face with Zwanik Artworks!

Tuesday 9th June 2015, Private Art Exhibition, 504 Space Gallery, Old Street: goes down in my personal history as an historic event. Coming face to face with German Zwanik’s paintings for the first time, some of which I had previously viewed online, was a pretty awesome experience. Whilst German’s artwork is impressive from a distance, you can feel the power, the pain, temptation and loneliness once you observe his work up close (and personal!) Funnily enough I was particularly struck by the tracks created through brushwork, an integral part of some pictures.

It was interesting to see paintings created in different styles- oils and water colour, on canvas and material; especially the way German presented his pictures. German left the edging to the painting on one picture of a girl pinned to a washing line above the city- he said he likes the way the colours look! 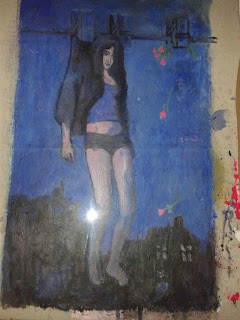 Returning to brushwork. Maybe I’m stating the obvious, but if you think back to your own early efforts where paints or even colouring are concerned, we often take pains to ensure we do things consistently in an even direction.  I realised that, when looking at artwork, the brush strokes actually cause your eyes to focus in a specific way and noticed this particularly in the painting I refer to as ‘Mirror Mirror’ (might I ask- what secrets lie behind the mask?’...) German gives his paintings very straightforward names leaving the complexity of the works to speak for themselves whereas I re-title them in line with my poetry. Please see ‘BallerinaOverkill’

The painting ‘Woman in Front of the Mirror,’ sparked a group discussion where people considered the model’s characteristics. German describes her as innocent whilst one of the participants viewed her as lonely. I believe my opinion will unveil itself with the completion of the above poem, currently in the birthing phase. Whilst the profile of the woman has an almost naive quality, her mirrored reflection is clearly highly sensual and people regarded this as her true inner self. Throughout history mirrors have often been depicted as containing mystical and sometimes evil qualities, rooted in superstition- so feel free to interpret!

German Zwanik commentary:
‘This painting is called ‘Woman in Front of the Mirror.’ I think it’s nice to show a different character: and you can see her and the other part of her character where she’s wearing a mask. There’s something powerful and something sensitive. I like the colours as well and find a kind of mystery in the picture.

Does she understand herself? ‘Maybe, or maybe she’s surprised. That’s the thing about this. But I think one side is more powerful and the other more sensitive.’

German has painted a collection of angel pictures and exhibited one inspired by the model Kim Jean that is clearly not angelic, sporting a very insolent ‘touch me if you dare’ look, whilst taking drags from her cigarette. I think you can really see the power of the painting and the way the dark angel appears to be feeding off the living model. This is where the true genius lies.

I was delighted to have the opportunity to speak with Kim and find out how she came to work with German and why she thought he had depicted her in this manner. 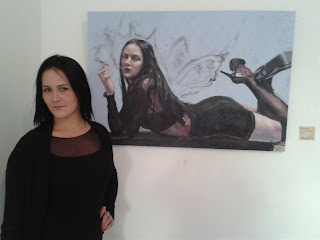 Kim Jean: ‘I have been friends with German for the past couple of years and absolutely love his work; he’s a brilliant artist. So when he asked me if I would model for some of his paintings, I happily agreed. He’s very easy to work with. I felt very comfortable and he’s very professional. His painting is extraordinary, his results are outstanding. He worked ‘live’ for a while and from photo's that he took of me in his studio. I think that as German knows me and the times that I have been through, he really captured an essence of my life within the painting. Now I live in an eco village in the woods at Runnymeade and I’ve been there for about three months. During your life you do grow and change but I suppose there’s always going to be a part of me that’s a dark angel.

Having had your previous life experiences captured in this picture, what might you expect from another picture? I think German’s an artist who looks into people and finds what suits the painting. I think he’s quite picky about who he works with and what expressions they can give him. It’s good to have a basis and if you know a person it can work well. I think I would like him to come up to Runnymeade and take a look around because he would be quite inspired. It’s the whole thing with the democracy and freedom. Runnymeade is where the Magna Carter was signed and there are current contradictions to address with the Queen’s up-coming visit.’ 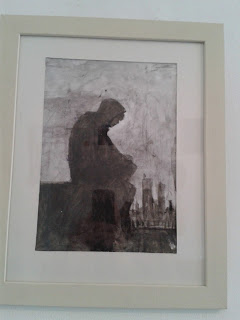 The exhibition included a particularly sombre picture entitled, ‘Boy on the Ledge’ so I asked German for his thoughts:

Boy on the Ledge- German Zwanik
I think it’s a guy sitting on the ledge with the city behind and we can feel how life for him is going on. I like to show this grey behind him. I chose to do it in black and white because I think the city is usually grey and dirty. I find black and white is a good way to show sensations.

Do you get a storyline for your character in your head? I think every single picture is different. It’s a different person and when I start working on it I start feeling the character of the person that is in the painting. Inside of me, I know this character so I try to play in a good way. This for me is the most important thing in my paintings; the characters, the psychological things and what is going on inside the person.

Is this set against the moon or a dusky day? I think it’s the day, the light of the afternoon.’

I will leave you now to Google German and explore his works further as these images were taken with my ailing phone and do them no justice!