Very exciting to have an overview of Battle Creek Hackney- the no budget film! I had no idea how many actors have been involved having only popped along to a one day shoot, 'Battle Creek Hackney-Day On Set' , - it came as quite a surprise. Here's the summary from Youtube & all the links you need can be found below the video.

'In the dark heart of East London, war is brewing. A delivery boy, Rakib Rakuen, finds himself fighting to the top floor of Hackney's most crime-ridden building, the Malakai estate. A ruthless mobster, Grigori Iniquity, wants Rakib's latest delivery and will go to any means to get it. With only his trusty friend Ronin by his side, can these two survive the worst Hackney has to offer and get to the top floor to deliver that package?' 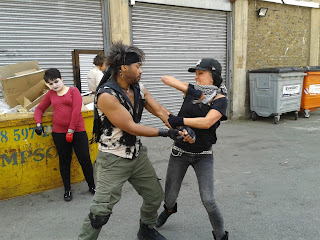 This is a fantastic project which has gathered momentum along the way, attracting new actors and subsequently expanding the action. I'm really looking forward to the finished article so 2016 is already looking attractive! Everybody involved is dedicated to helping make this film a success and the fact that is a no budget film hasn't impacted on the standard of acting- in fact the film is thoroughly energised having created quite a buzz already. I have kept in touch with several actors from my day on set and they are all busy progressing in their own directions- incidentally, i have since discovered that some actors have worked together previously on different films.

Point of interest: I recently interviewed Paul Van Beaumont (above), who plays Ronin, and will be posting this shortly so you can discover his story!

A link is also provided on Youtube to the Battle Creek Hackney theme music- 'Battle of my Life,' which is a great song written and performed by Guy Barnes, so at some point down the line Its Braap will share the music video.

Jaz McKenzie~ Word Magician
Posted by ITS BRAAP ITS LIFE !! at 21:22