Flying With Mozez~ 5 Key Questions about WINGS the Album

I love to find out where artists of all disciplines draw their inspiration from. This week I presented Mozez with 5 Key Questions based around, ‘Wings’ The Album, to discover the motivation and purpose of his latest work. 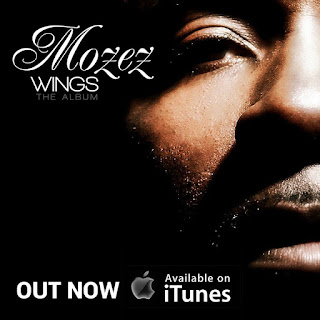 Can you speak about your albums preceeding Wings to give us a little background information?
My own personal albums I released were, ‘So Still,’ in October 2006 and the other one was ‘Time Out,’ which was a re-mixed album, an amalgamation of different tracks- some old tracks and some new tracks. ‘So Still,’ was the title track and we had, ‘Feel Free,’ which was produced by Guy Sigsworth who worked with Madonna and is a top producer. We also had Baby Blue and Eternity. The overall theme was to share my experiences as a child and up: my life in the church and my life generally, giving a background to who Mozez is. I talk about human nature and my visualisation of how life was at the time. I would call it a brief encounter with Mozez.

How did you choose Wings as the title track for your album? Well the title track initially when I first created the album I anticpiated would be, ‘The Absolute,’ because I thought it covered a number of different elements of the album. However, after reviewing it we decided to go with, ‘Wings,’ as we thought, 'The Absolute,' is a more abstract title that people might find hard to relate to. Everybody will understand what Wings is about because everybody has the challenge of wanting to be free, has the challenge of wanting to fly- to be somewhere else sometimes. So we thought that Wings would be a better title and indeed it encompasses what the album is about more so than The Absolute.

What do you want people to take away from your album? What I want people to take away: the album is about my experiences and I hope that I share similar experiences to a number of people, so the whole point is to be able to learn from each other. The album is about faith in human nature, it’s about love of self and covers a whole raft of different ideas I think, if I put it in one term it’s how to live; my visualisation for our society.

Do you have any favourite songs on the album? Yes I have. Mirror Mirror for me is probably the outstanding favourite for the moment, but The Absolute is another track I have a lot of time for because it’s an encouraging track. It’s a track about standing still, believing in yourself and facing the challenges you have as a human. Mirror Mirror reflects on who we are as people, as a soul. How we see ourselves, how we value things, what inspires us, what challenges us- a lot of things, so Mirror Mirror from that sense is a favourite song.

Next week we will participate in a little lyrical study based on, 'Mirror Mirror.'

Word Magician, Poet and Writer. Contact me for a professional review or bio that will be presented in my original, distinctive style to help create YOUR desired image. itsbraap@live.co.uk