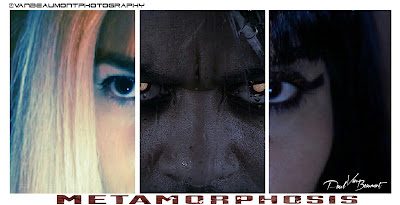 Wow, what a cool film title- and I was fortunate to be invited along to one of the key scenes, the metamorphosis itself ,some of which was shot using green screen. Note, the actual technique that metamorphosizes the characters is highly specialised and applied during editing.

I have been on shoots before but this was quite an eye opener. Firstly it was a night scene shot during a hot day, so the room needed to be blacked out for the filming to be effective--- swelter, swelter! Can you imagine it- closed windows and blinds combined with studio lighting and four people in the room? Kudos to everybody and have to say I was extremely impressed by the professional attitude of both actresses, Lobna Futers and Kasey Sfetsios, who share the character Carmen- fantastic job with both keeping their focus and calm for hours!

Paul Van Beaumont has a very clear vision for the film and knows exactly what he is aiming to achieve in each shot. Due to the skill of the actresses very few re-takes were required; and I liked the way Paul encouraged both Kasey and Lobna to contribute their own ideas to the scene, making use of natural props. One interesting twist Paul decided to include, knowing the background of his actresses, were the native languages spoken by them and used during meditation, Kasey speaking Afrikaans whilst Lobna spoke in Arabic. This definitely added a little mysticism to the chanting, thus extending the character 'Carmen' whilst utilising the girls’ abilities.

I think Paul’s choice of actresses totally reflects the aim of the film. Carmen has two sides, the apparently innocent Kasey- whose face undergoes an astonishing transformation once she begins chanting, and the traditional ‘darker side’ played by Lobna. The striking physical contrast and mild similarity between the two works perfectly for the metamorphosis.

The most challenging 'technically tricky' scene in my estimation was that of Kasey sitting in a ring of candles meditating. For this to work properly the mini camera had to be positioned on the ceiling- in exactly the right place and due to technical reasons the rest of us left the room while the camera was running in order to acquire a clear shot. One of the tricks of the trade about which I knew nothing! The heat and the cameras were not best friends however sufficient footage was shot and I know that it has been skilfully edited since.

Once Kasey had completed her footage, Lobna stripped off the somewhat overheated make-up and replaced it to compliment her next look- the scene in which… well, I'd better not give too much away! At this point Paul was needed in front of the camera leaving me to click the right buttons- was that too trusting as I’m deffo not the best qualified for the task? Apparently it was a justifiable decision as the shots came out ok!


To round off the day’s shooting, we finished with some outdoor scenes of Lobna in central Watford.  Paul had taken test shots of the area previously and included a little extra footage that he felt would contribute well to the film. I am excited about this project and although the filming is not yet complete you can watch the trailer, which was made a little while ago, and start anticipating the final result! I was very impressed with this trailer and it definitely has a big screen feel to match its title- Metamorphosis AD really does sound like a box office smash to me! Once the film is complete we will be speaking with Paul about his ideas and the final product, something else for you all to look forward to.