An introduction to Rocker~ Ghetto Songbird! 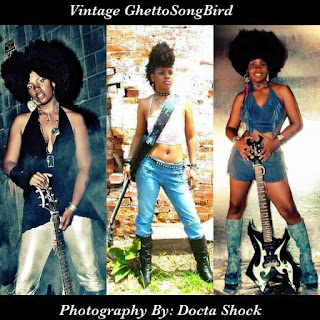 A very brief introduction to Samantha Hollis- Ghetto Songbird, whom I met this year when she performed live at the Troubadour Club, London. This will be followed shortly by more in-depth questions- see below!

Where did it all start? I started at the age of twelve writing poetry and soon evolved into writing songs. I wanted my songs to be heard so I decided that I needed to start doing talent shows and go out and sing. I would use beats like hip hop beats and add my own words because I didn’t have my own music at the time.

How did your music evolve into a career? Eventually I started playing the guitar around 2001 just for fun. I didn’t have any thoughts of going out and playing the guitar in public, but my brother set me up with my first gig when I was just one month into the guitar. That was with a local poet from Philadelphia, Terrell Allen . Next thing I know I got my first gig and it spiralled from there. I was still reluctant to play my guitar in public so I asked a guitarist to play shows with me around the Philadelphia area as well as the New York area . Eventually I came into my own. I started playing my own songs on my guitar and singing all over the United States at famous clubs such as CBGB’s, The Bitter End, Whiskey A Go Go and I’ve played at the Apollo Theatre, I was the first rocker to perform on B.E.T 106 and Park -cable TV and music show, and am still probably the only rocker on that show.  It was great because I was the spotlight artist. Now I’m just trying to spread my wings and take flight to different countries so I'm playing down here in London.


What type of material do you write? I mainly find myself writing a sort of social conscious music because I grew up in North Philly which was pretty much the ghetto of Philadelphia. That's because I would look out my window and see so much drama going on. I kinda absorbed it through writing my songs and playing my guitar, becoming a Rock N Roll singer/songwriter/guitarist.

Who do you most admire that has actually made it in the music world? Jimi Hendrix of course, Prince, Nina Simone, B Funk...

What’s your ultimate ambition? It used to be to be a signed artist, but now it’s just to get in my mode wherever and whenever, just delivering the message that was sent to me.

A huge thanks to Ghetto Songbird for taking time to share her humble beginnings with us which I feel sure will encourage many other musicians who are striving to build their careers.

Review of live performance and album.