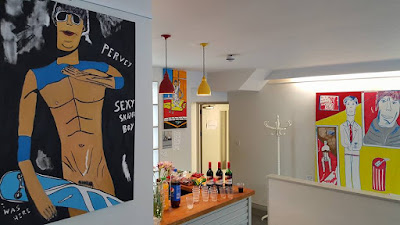 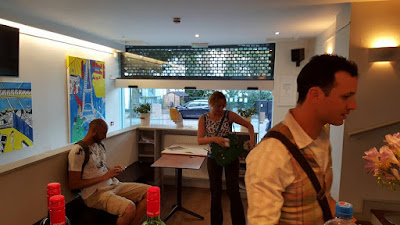 Tim Stocks exhibition at Maida Hill Place, off the Harrow Road. July 2016
When you go to a Tim Stocks art exhibition you leave feeling very cheerful! Tim manages to create a buzz with his work, the colours positively vibrant and bouncing off one another I’ve no doubt!

Tim’s work is extremely distinctive and he has the capacity to tackle politically sensitive subjects by putting a spin on them. Here we have a homeless young man with his dog. An everyday occurrence in London really and you would probably walk past him. Tim takes a very alternative approach and literally turns the lad into a celebrity whom you wouldn’t dream of by-passing, giving him the type of jacket a rock star would wear. This really makes you take a look at the picture and hopefully reflect on the young man’s situation. 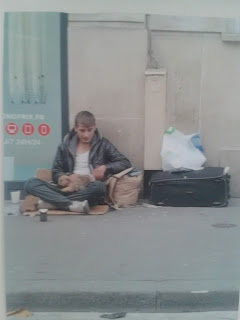 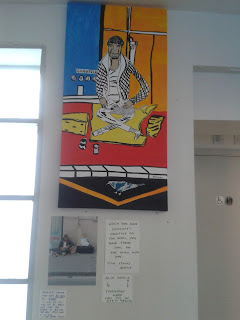 Must mention that I appreciate the way Tim is displaying the original photo’s that have inspired his work and giving brief descriptions to help us get a better sense of importance. I particularly liked the refugees and young Dylan- a seventeen year old who committed suicide for no known reason. Tim clearly feels a connection with people’s plights however he has many different sides. I love the pervey skate- boarder- Tim’s humour really comes through and the guy is definitely sexy!

Tim is very well travelled and has painted many different places, bringing definition and clarity to them. He has also painted many famous figures such as Winston Churchill, L. S. Lowry and many more besides. I think it would be nice to share the opinion of one visitor to the exhibition- Ian, and allow him to further define Tim’s work:

‘I love it, I think it’s fantastic. I could say I like it because of the colour, also the drawing- it’s very naïve, angular and powerful. The colour’s very bright it’s a wonderful contrast. When I look at the pictures I can see beautiful contrast between blue, yellow and red. They’re all very well balanced and there’s no mud in these pictures, it’s all primary colours.  Everything about Tim’s work is strong. The drawing is very well observed even though it’s naïve- he’s got all the details in. I think it’s just marvellous stuff and I think there are a lot of people in the Royal Academy who could come here and get a lesson from Tim about being honest in their work.' ~ Thanks Ian.

I will shortly be bringing you an interview with Tim which is extremely interesting- I guess interesting is what we expect from the mind of an artist! In the meantime you can see more of Tim's work on his Facebook Page
Jaz McKenzie~ The Word Magician Emaail: itsbraap@live.co.uk