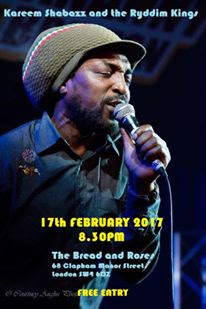 Kareem Shabazz/Ryddim Kings Live and on Fire!
Once you have finished this blog it’s time to update your bucket list with the words, ‘Go and see Kareem Shabazz and the Ryddim Kings LIVE!’ Naturally I encourage you to check out their music, however the essence of this band’s live performance enraptured me to the extent that I found myself capturing them in poetry, with the focus primarily on Kareem’s voice which struck a vibe that I didn’t know existed- aaahh sheer joy!

Now onto a little background. I was very impressed with Kareem the first time I heard him sing, which was a couple of years ago at the Hootananny, Brixton- sweet, sweet, sweet; but listening to an entire set accompanied by such a highly energised, professional band took the experience to a whole new level- in fact, this elevator went on up to the penthouse in one sweeping motion!
Kareem has a natural talent for showcasing his voice across a range of styles which include his own material and cover versions of timeless songs. It was an evening containing the element of surprise- the ‘Lets;’ to my total incredulity as I have been playing the following two songs, which Kareem sang in succession, on the bus in exactly the same order for a few weeks- first, Marvin Gaye’s ‘Let’s get it on,’ followed by Al Green- ‘Let’s stay together.’- Let’s repeat those two tracks is all I can say because they sounded just a brilliant as the originals - in Kareem and the Ryddim Kings style of course.

Incase I’m giving you the impression that this band is all about Motown revival, their primary genre is Reggae. Reggae with a Rock Music feel, very powerful, which I believe primarily due to Clinton ‘Rock’ Jones’ guitar skills. Clinton injected a rock flavour through many of the tracks and I thoroughly enjoyed his little solo’s. I must add that all band members did a great job- Learoy Green, drums, Spy Austin on Bass, Mark ‘Doctor’ Livingstone on Keyboards, Clinton ‘Rock’ Jones- Lead Guitar. 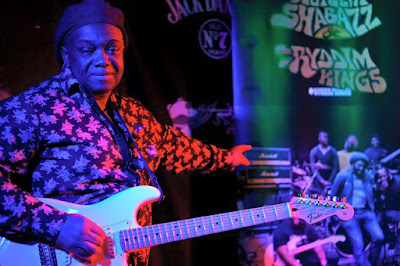 During the opening numbers Kareem introduced tracks from his debut album, ‘Born on the Street,’ produced by Stingray Records. Initially a few technical difficulties affected the quality of Kareem and the band’s performance however after the trials they conquered which the audience was definitely testament too- yes a few people were up and dancing at the front, and the level of applause across the board following each number spoke for the rest. It was most definitely a great evening and one which I will remember for a long time- in fact, with more gigs planned to promote the new album, it is an experience that can be re-lived to the live vibe.