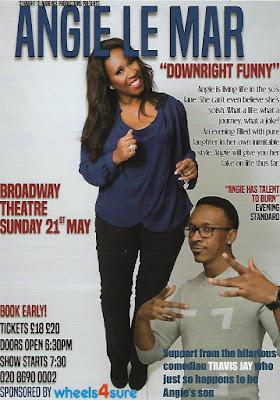 Full Circle- interesting title for an autobiography as attributed to her book by Angie Le Mar. Circles and cycles are key to life and interestingly attending this book signing came about through one such circle, the circle of friendship and business via Mark Galloway. Thanks to Angie’s inspiring and infectious vibe I’m sure many more circles will be created wherever she goes, and this includes inspiring my circle of creativity- think I’ll stop running rings around you now however I’ll encourage you to study the links within your life.

This fabulous event was held at Nu Dawn Coffee shop & neighbourhood hub in Well Street, Hackney- a new business venture. It’s a fairly intimate little venue and well suited to this type of event.The evening was hosted by Juliet Coley whom I met previously during the Everybody Dreams campaign, a major, newsworthy project in Hackney. Juliet has a lovely relaxed style and read passages from Angie's book, afterwards asking what she wanted to know; in my opinion the way to achieving an insightful interview. 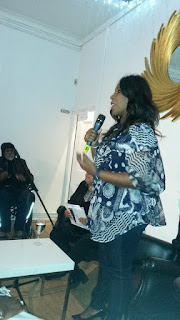 Question: What was so great about this particular event? For me, Angie’s portrayal of her stories, her spirit and determination to take charge of her life in every situation. Angie spoke about how she found ways to overcome each challenge as it presented itself from childhood to adulthood. These included challenges of filling long summers with childhood games whilst other families went on holiday, accepting siblings whom she was unaware of, and several serious 'biggies', battling with dyslexia, professional rejection and living through an immensely painful and almost fatal pregnancy.

Dyslexia is a make or break phenomena that was barely recognised during Angie’s early school days although we are well aware nowadays that many entrepreneurs are dyslexic. In many ways the dyslexia gave rise to Angie's natural ingenuity, creating opportunities to develop her God-given humour. In what way? I hear you ask. Angie loathed school and messed around in class, telling jokes so that she was sent out before being called to do the one thing she dreaded most- reading aloud. Angie trying to read English was the same as me trying to read Japanese- this we understand as the words make no sense! Refusing to be beaten by auditions, where she had to read scripts, Angie conquered Dyslexia to some extent in her own indomitable way later in life, writing highly successful plays- ‘Funny Black Woman,’ being the first of several, and most recently progressing to writing her new book. As Angie said, she was determined to write her place in history! 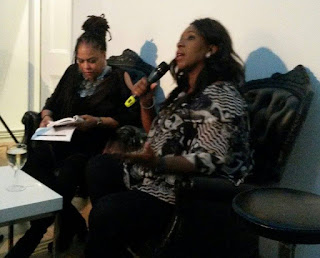 Angie described many memories which had the audience in fits of laughter as they were re-living similar childhoods. Along with these stories came the serious issue of racism experienced in Angie’s professional life. Racism is clearly rampant within the showbiz industry yet Angie finds ways to stand up for herself and is a great role model for others in similar positions- as Angie says, being black and a woman has the advantage of being a two in one deal! Angie watches, learns and when the time is right strikes back by doing the same thing, only better. Angie spoke about her experience of being thrown off The Vagina Monologues on the fabricated pretext of not being happy, so she faced her colleagues head on and later created ‘The Black Vagina Stories’, which proved even more popular. This demonstrates Angie’s fundamental belief that we need to ‘Keep It Real.’ I believe Angie’s attitude demonstrates the need to acknowledge but not accept the realities of life. So often what appear to be facts are generally creations of the masses, ie: the result of popular opinion. Regardless, Angie has a special talent for delivering her truths to a constantly expanding audience.

Along with creating opportunities for herself Angie made openings for others. In her book Angie displays her empathetic side when speaking about the need to overstep people who have helped you to establish something because you know that they are not yet ready to perform at the next level when the occasion demands it. Dealing with these situations is hurtful' so Angie speaks about putting yourself in other people's shoes and the true art of forgiveness- something we have looked at on Its Braap previously.

Throughout her career Angie has worked with fabulous comedians such as Felix Dexter and Richard Blackwood- and too many actors, actresses and radio guests to name. Angie met several of her idols including incredible poet, social activist and more- Maya Angelou, larger than life Whoopi Goldberg, Sir Lenny Henry C.B.E. and singers John Legend, Stevie Wonder and George Benson- the list goes on! Once again, Angie demonstrates on occasion how this came about through her ingenuity through her ideas, actions and quick thinking. She blagged her way to meeting Whoopi and got a free ticket to see American actor, comedian and film maker Tyler Perry. Angie paid tribute throughout the evening and in 'Full Circle' to her family, friends, co-workers, mentors and those who have been there for her at significant times in her life.

A book is never finished until the story has been told. To be real is true strength and we were all touched when Angie dissolved into tears as Juliet read passages about Angie’s incredibly close bond with her father. Angie went on to speak about this special bond and how she had been encouraged to add a chapter about her relationship with her father before the book was published. In its way this was about coming full circle, fitting beautifully with her Father’s mantra- Whatever you start... finish! This just goes to show that when writing an autobiography where we are free to pick and choose, it is essential that we include the key players in our lives and our greatest challenges. It is equally important that we look at our successes and failures- Angie openly describes some of her worst moments and how the things that are meant to be still come into being.

One significant final point out of the many Angie made throughout the evening, which helps encourage us on our individual journeys, is Angie’s self belief. Angie spoke about her deep set belief that she can open almost any door and the reason for this is Angie’s faith resulting from her church background, self confidence and the family love she has been immersed in which she shares with everyone who is tuned into her channel. Angie attended church in her youth and returned as an adult, finding God's purpose; surprisingly to bring her gift of stand up comedy literally into the church!

I have read Angie's book and whilst doing so found myself writing a poem about her called, 'Black Diamond,' which I will blog later. I have to say that the message Angie inscribed in my copy of ‘Full Circle,’- ‘Whatever you start... finish’ speaks volumes, so I am taking this forwards in my on-going journey and will finish by saying, thank you Angie for being such an inspiration.

More links to Everybody Dreams can be obtained via the search button!
Inspirational material also available on my page, 'The Word Magician.'