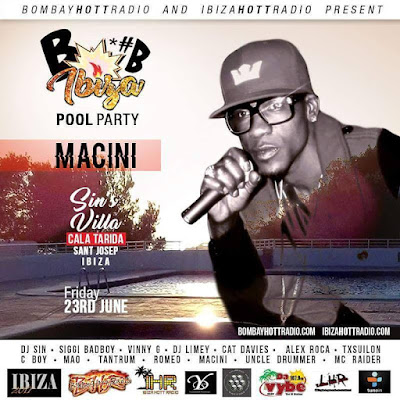 'Popular Dancehall/Reggae artist Macini is thrilled to announce that he’ll be performing again in Europe on Friday 23rd June. You’ll find him pumping up the party vibes at Sin’s Villa Pool Party, Cala Tarida, Sant Josep- perfect for Ibiza. ‘Man A General,’ as he’s become known since first performing his song in Gambia where he thrilled an audience of over 20,000 at the NationalStadium, has found his career spiralling upwards. Macini was invited to Germany off the back of this song, and Shaggy was so impressed when Macini sang it at Shaggy’s single release party where Stylo G also performed last year, that he called him back on stage and shook his hand! More recently Macini has blown people away with ‘Bad Gal,’ a song for the ladies, receiving airplay worldwide which has resulted in countless interviews and invitations for live performances including the Pool Party. Macini’s next interview is ‘the biggie’ on Jamaican Station ‘Nightly Fix’ at 3pm Jamaican time, Tuesday 13th June; so catch it if you can! Make sure to link with Macini on your social network sites for more updates.'

Jaz McKenzie~The Word Magician
Posted by ITS BRAAP ITS LIFE !! at 23:10