It's not an Illusion! ~ Working with Errol Kennedy~ Imagination 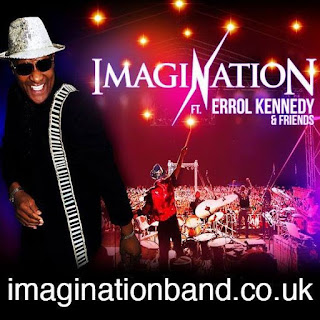 I used to dream of the day I'd have a celebrity in my flat, naturally it was Lenny Kravitz- those of you who know me know Lenny is my greatest inspiration. What we understand is that the universe delivers, so imagine how bowled over I was today having Errol Kennedy round my flat to discuss coverage of a number of his projects.

It's so strange how life works, especially as I recall dancing back in the day to disco floor shakers- yes, we had the funk, at least, Imagination had it bigtime with hits such as 'Just an Illusion,' 'Flashback,' and 'Body Talk.' Those hits are as fresh today as they were back then and you'd be hard put to sit still through them. I never could- turn up the beat and I jump up whatever the music- provided I liked it! Have to say, I don't get rare groove outside the bedroom, but there we have it. Funk and disco, Reggae and Soca, Drum and Bass- even House will usually find me on my feet because music flows and dancing is the natural outlet.

Let's return to today. Errol is a man filled with passion for his band, other works he has in progress and ideas in various states of conception- aha- you can try and guess but I doubt you'll get there. The point is that Errol is man whose belief and determination has turned dreams into reality. Everyone faces challenges so the fact the band split is simply prove of that fact- however, Errol believes in keeping dreams alive therefore re-formed the band and has released more music under the title- Imagination featuring Errol Kennedy. What I really like is that Errol is down to earth and very upfront about the band, giving factual accounts without drama or malice- so refreshing, especially as we see glorified celebrity battles in the media. There is nothing to be gained from bad-mouthing people and it is so much easier to work with people who refuse to do this; the atmosphere remains comfortable enabling progress. Those of you who have followed my blog know that this is a dirt-slinging free arena! Definitely not my type of journalism.

So what can you expect here on Its Braap? The answer is information on occasion and reviews. I will be applying my word magic where appropriate to Errol's various forums, an exciting proposition as there is far more to this man than his back catalogue!

Finally, Big thanks to Macky McPherson, Urban Delight Entertainment, for the recommendation. When I agreed to work with Macky a few years back I had no idea where it would lead except to success. This is a journey that is winding its way in a  forward direction and I believe many people's dreams will be met along the way.