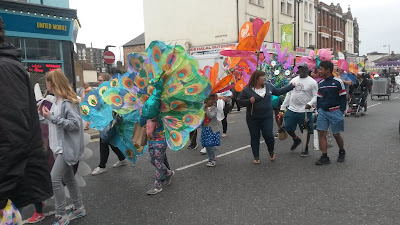 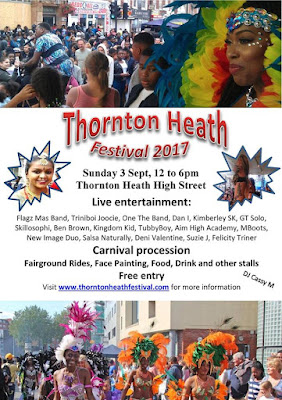 I was invited along to this wonderful festival to see the band Skillofski playing live- in fact, it's my first experience of the band having only just met Skilly. It is also a brilliant example of how the universe works- in more ways than one. As most of you know, I usually blog about the merits of the actual festival however, thanks to inspiration received through Leah McKenzie, Face of Croydon and successful XFactor contestant, I have decided to dig deep!

Thornton Heath Festival is celebrating a decade's worth of excellent community vibrations- I say that because you really can feel the vibration of a great festival, and this stems from the point at which a festival is conceived, the point of passion and expectation. I have known people who wish to create their own festivals and as an individual this appears to be an almost impossible task; you really need a great deal of recognition before you can attempt this, spot a gap in the market- or have such a unique idea it captures the imagination! When a council agrees to host a festival this does not guarantee instant success; everyone has to work extremely hard to create a great event that will build momentum over the years. 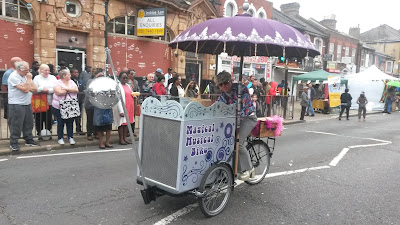 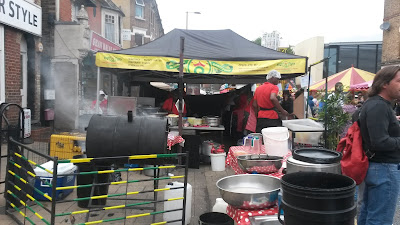 Thornton Heath Festival is a real community event that showcases local talent; something stressed throughout by the Master of Ceremonies and endorsed by Leah who embraces 'people power' and the need to 'do things ourselves.' This festival is organised by a committee of volunteers who have individual areas of responsibility- it is not all fun and games, serious issues such as security, health and safety, even licencing must be in place before a festival can go ahead, so when we enjoy an event we should give thanks for the people behind the scenes, in this case Chairman Tony Rowland and his Committee.


The community element was extremely powerful, particularly where the stage was concerned. The level of audience participation went way beyond anything I have ever experienced. I was there between 1.30-5pm so missed a couple of hours; sadly that included headline act Triniboi Joocie, National Soca Champion, however I was entertained by some pretty phenomenal fun. I enjoyed 'Aim High Dance Academy,' displaying their skills first before encouraging children to join them on the stage to dance to pop songs- shame my 4 year old Granddaughter wasn't there as she knows them all! The Academy holds classes for children and young adults across South London- these guys clearly love what they do. 'Salsa Naturally,' was all about participation and gave people a chance to 'be the vibe' with many happy participants!

People were also introduced to the joyful Flagz Mas Band who showed us a couple of this years routines- the children were very impressive and clearly take themselves seriously- great to see so much dedication in very young people. If you would like to take part in next year's Notting Hill Carnival and other band engagements, check them out. Each band at carnival works to a theme and this year Flagz Mas Band was all about 'The Next Chapter,' speaks volumes! Music time- Skillofski sang a few interesting songs on different rhythms and encouraged the audience to join in with, 'Great Big Smile.' This morphed from Rock ballad style into Reggae and went down a storm, encouraging people to be happy and look on the bright side of life. Another act that drew a huge crowd were dancers New Image Duo- well, who can resist a little Michael Jackson with a modern twist, especially when it's spot on?


Naturally elements such as stalls, fairground attractions etc were part of the celebration and hugely successful; definitely well received however, I'm returning to Leah McKenzie. Leah became a household name thanks to the X-Factor and is forging her own way, channeling her interests, personal philosophy and ideas into solid products and projects. She is a singer/songwriter and besides performing cover versions of popular songs she sang a couple of her original songs- 'Change'- Loved the lyrics and we all experience change and relate to this.Leah also sang 'One Love'- yes, a Reggae song with a British accent- fantastic. I love her versatility as much as her messages and am pleased to announce, Leah granted me an interview which will be shared in the next couple of weeks. I am excited by Leah's role and believe a great deal of good will be born from her association with Croydon council. Join me in watching that space and I hope to be in a position to update you from time to time,courtesy of her management.

I believe Thornton Heath Festival was a huge success and there truly is a great deal of talent in the borough. This is what makes this festival so different from Lambeth County Show which attracts big acts, often from overseas, and has a huge area enabling them to host a huge variety of events. There are very real benefits to the Thornton Heath Festival which includes the promotion of local business and talent, equally the opportunity for locals to discover talent that appeals to them and it even  gives people a chance to mingle with the entertainers!