OH WHAT A NIGHT!! 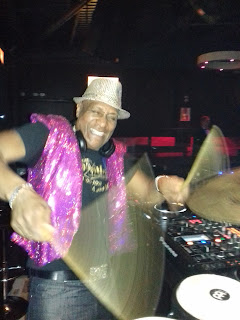 Bling is the thing when reviving the feel of this world's much loved 70's & 80's discotheque era. And here we have Errol Kennedy working his sparkling waistcoat and hat to full effect. Errol did as promised and Flashed us back to a time so rich in popular music that he found it very challenging selecting tracks for his debut DJ set. Errol did a fantastic job and I was ecstatic to hear 'Stomp,' one of my all time favourites- hear that and you simply can't sit down! 123 Shake your body down, yes that's a must. It has to be said that during the 70's and 80's we were constantly instructed to dance instead of acting like wall flowers; which is where the feel-good factor emanates from and this is a huge aspect of the culture Errol aims to revive.

According to Errol, weekends were a time when people dressed up, left their worries behind and hit the dance floor. Many a 'peacock' paraded about strutting his stuff, the girls danced round their handbags and eventually slow music ensued... well, that's another matter. Errol's point is that clubs no longer have the same energy and joyous feel, often the night is more about drowning your sorrows with 'shots' than dancing, alcohol being so rife in the youth culture.

Clubbers clearly felt the musical groove on this occasion joining the 'Love Train.'  'Word Up,' epitomizes the role call of top tracks that engulfed us including: 'Street Life,' 'Give me the Night', 'Boogie Wonderland,' 'Ladies Night,' and two different versions of Imagination's top track, 'Just an Illusion.' The new version of this classic hit lends itself very well to the current club scene being bang up to date. 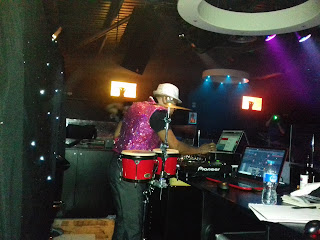 Naturally, Errol brought his drums along to give his DJ-ing an extra kick and spice things up even more. When reviewing the night two key words come to mind- FUN and NOSTALGIA, both of which were successfully woven through the set. Errol's passion simply exudes from him to the point where he jumped up on one of the podiums and danced- once a showman!!! People thoroughly enjoyed themselves and think in summary the phrase that said it all is:

Let's go round again and turn back the hands of time!