July 03, 2022
I was both thrilled and excited to be invited to the premiere of the pilot for this original series by Elsie Nemlin, writer and executive producer at May Film Works. TV drama is forever popular and this new series, comprised of six episodes, is both fresh and current. Odile successfully tackles issues that, sadly, we are all familiar with as they frequently receive coverage on the news, documentaries, soaps and other media outlets.
When I first saw Odile in my newsfeed I wrote to Elsie and asked her whether the film title had been inspired in any way by Odile, the black swan in the classical ballet Swan Lake who is essentially evil, plotting and scheming. As it happens there was no connection. Regardless, I think Odile is a very appropriate title for the film that in a way relates to Swan Lake given the dark storyline, which is based on true events, and the issues that subsequently arise. The character Odile is a very strong, positive, black French woman who dreams of a better life, so she persuades her white French speaking husband to move to London. I am hoping that the series will fill in some of the blanks, the reason for Odile's desire to move from France to the UK being one of them. The family's fourteen year old son moves with them and it would appear that they have not given enough consideration to the challenges that could potentially arise.  It is extremely difficult for immigrants to find jobs (especially non-English speakers) and this, along with her husband's ensuing alcoholism also ties in with different forms of abuse that are relevant to society but not specifically to this film.  Violence in front of children is abuse, but also relevant are ritualistic abuse and witchcraft where a specific child might be used as a scapegoat, being blamed for a family's bad fortune following their move to a new country. This is a whole different subject and very current issue which has resulted in the deaths of young children here in the UK. Let's now return to some good vibes! 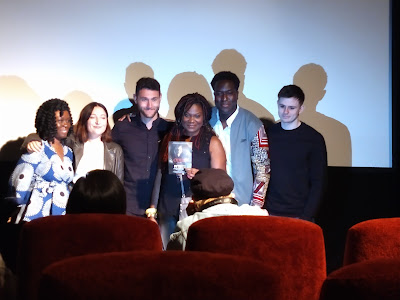 We had a very nice venue for the pilot, Clapham Picture House, and Elsie was the perfect hostess giving us a very warm welcome and speaking a little bit about her journey. Odile turned out to be a decade in the making and it was good to hear that Elsie nearly gave up on more than one occasion but returned each time to see her project through to completion- I have to say that this was an inspiration to me, especially as I nearly gave this blog up for good! To find out why click here. I believe that the set-backs and progression of this project will be of great interest to many of you as the story behind the story has power in itself. I am pleased to say that Elsie is very happy to have this discussion so that we can relate to her personal journey and draw strength from it. 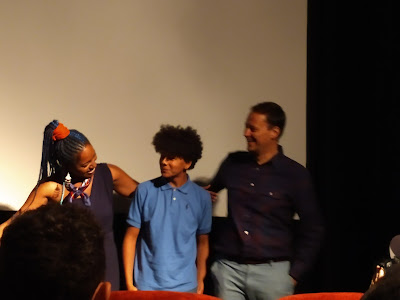 I hope you enjoyed the official trailer which provides a flash insight into the storyline and certainly sparked my interest. The pilot fulfilled its promise and proved to be gripping, gritty and very thought-provoking. I really wanted to see more immediately as the characters were beautifully portrayed and the storyline was extremely realistic. This is a clear sign of the film's impact. I was pleased that Elsie included the backstage video in which the actors and other people associated with the film shared their thoughts, speaking about why they were interested in this project. The general consensus was that the script was excellent and covered subjects in a direct yet sensitive manner; most reflected on the need for continued exposure. Part of this film has French sub-titles, which aids the realism, and speaking of realism I found myself relating to young Jean- Philippe's fear of involving the police. I know first-hand that while the police are interested in obtaining information about the perpetrator, the child's fear of repercussions from gangs is very real. When my son was involved in a minor incident (as a teenager) he refused to reveal the names of those involved to the police despite their so called re-assurances. The police cannot guarantee any child's safety therefore we need to respect our children's very real fears. I was shocked when a child from the gang who stole my Son's phone was murdered in the local park a week later. Thank God my Son kept his mouth shut. 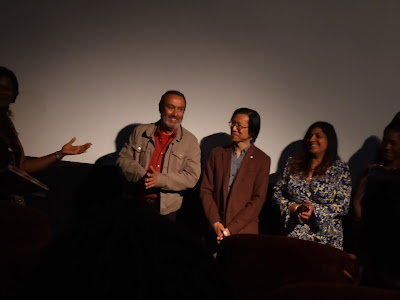 Odile is an ugly story; it is going to tug at the heart strings BUT it needs to be told. I was interested to discovered that renowned artist Mica Paris MBE was the executive producer and also played a part in the film. The rest of the cast are as follows:
Nikki Zag (Odile) Christophe Delesques, Taye Junaid-Evans, Sanjiv Hayre, Sona Vyas Dunne, Cx Wing, Lucy Blake, Parvinder Shergill and Jason Yip (Voice.)
I am planning to speak with Elsie and will discuss ways to cover this project moving forwards. As already mentioned we will be pin-pointing some of the glories and challenges undertaken throughout the process. Regarding screening, Sky TV has expressed interest in Odile, however, has not yet made a final decision therefore Odile is still being pitched to other potential  commissioners and is awaiting its destination. We will inform you upon confirmation of the channel once an agreement has been reached.
My final recommendation: please check out May Filmworks to see their other films and TV series.
Jaz McKenzie~ The Word Magician
Facebook groups: Its Braap   What's Up Jaz
councilestates domesticabuse elsienemlin gangculture grippingtvdrama immigrationchallengestoday knifecrimes mayfilmworks micaparis odiletvseries