Keeper of the Fire- a fascinating article regarding the book by Teresa R. Kemp. Written by Dean Brown 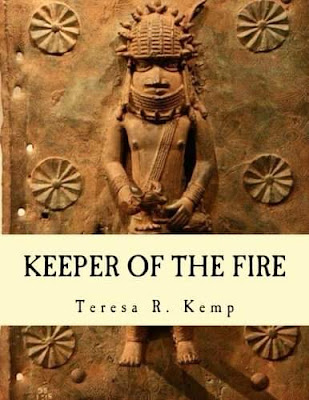 For my readers out there, get this book!!!! I had the pleasure of briefly chatting with Author Teresa R. Kemp at the 2015 Atlanta Juneteenth Festival in 2015. Her book, 'THE KEEPER OF THE FIRE' is a groundbreaking work discussing the secret African military visual communication systems used by Igbo Metalsmiths before and during the AMERICAN civil war. She traced her African ancestry directly to an Igbo Metalsmith from Akwa, Nigeria, her great great grandfather.

He and the other members of the Igbo metalsmithing guild used an African secret society language called 'Nsibidi' that was not understood by anyone not of the Igbo metalsmithing guild and certainly not here in colonial America. When they found themselves in this hostile situation in Colonial American Work Camps (ok plantations) and saw their country men and women and children suffering in the American plantation system in situations of imminent death, torture and forced labor, he (and others that understood the language) used their African language’s symbols as maps and messages sewn into quilts, written in dirt, along with songs and symbols to get them to places of refuge and later America’s Underground Railroad network which actually ran south east and west as well as north. The first Baptist Church in Savannah is the oldest in the nation, and has Nsibidi on the floor and ceiling indicating it was a place to hide refugees.
In the repressive society of colonial America, African Metalsmiths could not produce the metallic arts like they would have done for the royal court, painting homes or carving the royal palace doors as they would have done in Akwa (Nigeria), but they could sew the same patterns and symbols into textiles in plantation sewing houses without anyone suspecting anything. Others even braided certain symbols of the alphabet into hairstyles. AMERICANS STILL THINK THESE ARE CIVIL WAR ERA QUILT PATTERNS!!!
But this writing system was fully formed about 2500 years before The United States existed . . The Ibibios and Efik people taught Nsibidi to the Igbos through the Ekpe (leopard

) society after the Igbo offered refuge to them following a migration. in Arochukwu, the Ibibio leaders had a secret society called Ekpe. Ekpe means leopard. The leadership operated (and still does) in an esoteric manner. Only members are privy to the innerworkings of the group.
They developed an elaborate system of logograms through which their ideas, knowledge, and activities were recorded. Nyibidi which means turning (going in circles), evolved into Nsibidi. Nsibidi is Ibibio for what is at play or, what's playing? Nso = what. I(as in letter "e" = is. Bidi = play or playing. NSO-I-BIDI (NSIBIDI) or NSO-I-BIRI(NSIBIRI) means what's playing? What's at play like "what's news?" They Developed this writing system called NSIBIDI around 2500 years ago, now existing as a secret society in Nigeria, surviving here in the Americas, Cuba and Central America. 'Keeper of the Flame' also has Information about the Underground Railroad Secret Quilt Code Museum, Solidly researched with 187 years of collected artifacts and textiles, documented history to preserve and teach.
For booking info or to support her traveling exhibit & book tour, see this website: http://www.plantationquilts.com/ and also see this website for link to an amazing interview with Author Teresa Kemp

http://www.americancivilwarstory.com/underground-railroad-interview.html  #TheAfricaYouDontSeeOnTV
Dean Brown
Dean Brown is a child of the Global movement of Roots Reggae Music. He began Producing and Performing original music in college. Dean's background in live television became fused with his passion for visual storytelling and Pan Africanism, further nurtured by his work as an innovative Indy music artist on the gobal Reggae scene and bringing Reggae to new levels of creativity to new audiences
You can follow Dean on his Facebook page
I hope you enjoyed the article. It shows us how the human race can overcome adversity and this is a particularly intriguing example which has been integrated within the Igbo culture- people of South-Eastern Nigeria, and is still in existence today.

All shares and comments, especially directly under the post are appreciated!

Its Braap  What's Up Jaz