A History of Black History Month 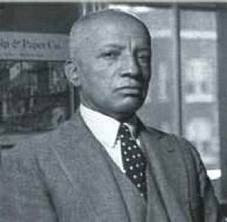 Black History Month... what does this mean?

Black History Month began in the USA as far back as 1926, however it started out as ‘Negro History Week, being founded by the son of a former slave family, Carter G Woodson. Carter’s story is a journey from poverty to education via self-determination. This man whose parents could not even afford to school him was self educated until he entered the system and ultimately gained a Bachelors & Masters degree at the University of Chicago. He truly is the cornerstone of everything that Black History Month now stands for.

QUOTE:
‘If a race has no history, if it has no worthwhile tradition, it becomes a negligible factor in the thought of the world, and it stands in danger of being exterminated.’
Carter G. Woodson

One of the best things about Black History is that it remains a story in the making and thanks to Carter G Woodson it is celebrated in 3 countries: USA, Canada & the UK. Carter originally set the week according to President Lincoln’s Birthday and naturally Canada also celebrate in February. Here in the UK we celebrate in October, following events in 1987 to celebrate the African Jubilee year. In the UK we have many independent events to celebrate diversity whereas in the USA a theme is set each year. This year Americans are honouring black women whose achievements have helped to shape the United States. I imagine this means that contemporary women like Oprah Winfrey & Maya Angelou should be included as they are history in the making and have had a powerful affect within society as a whole.

What influenced Carter G Woodson & inspired him to put black achievement on the map?

Carter travelled to Chicago specifically to celebrate the 50th anniversary of the end of slavery and was so enthused after enjoying three weeks of festivities, that he co-started an association to study Negro life. It was probably his enthusiasm & charisma that generated so much interest.

It is good to have such a positive slant on these proceedings, showing the world the true meaning of equality, and provide a focal point that educates the rest of society about Black achievement alongside the knowledge of slavery and captivity that we are all familiar with. A great journey... Negro History week ultimately became Black History Month and is now an integral part of our calendars.