An acorn will remain an acorn until it is planted!

The fact is that we are capable of a great deal more than we could ever imagine, even bearing in mind that we only use a very small percentage of our brains. Everybody is born with potential, endorsed by the fact that children from poor backgrounds can really excel once they receive a proper education, achieving way beyond their families expectations. We looked earlier this month at Carter G Woodson who fulfils this example being born into a poor family, self educated & founding ‘Negro History Week’, that eventually became Black History month.

We do not know what we are capable of. A very simple statement which is true in the main as most of us do not really put ourselves to the test, preferring to stay within our comfort zone. 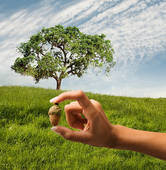 We must realize that people develop at their own rate. Some show their talents early whereas others do not blossom until much later in life. Sometimes we are aware of our talents however we do not feel ready to use them. Life is about timing and it is also about balance. If we have a lot to contend with, taking on a new challenge to stretch ourselves might seem too much. Naturally mental & physical health both have a huge part to play in our decisions & with regard to our limitations. Equally self esteem is very important. The X-Factor highlights the importance of self belief. How many times do we listen to excellent singers, Rebecca Ferguson being a prime example, who fail to trust their own ability. Look how Rebecca has grown due to the level of professional backing & proven popularity amongst viewers. Being told ‘Yes you can,’ to coin a popular phrase, may give you the incentive to improve your abilities across the board. If other people believe in you then you have every reason to believe in yourself!

What do you most want to achieve in life?

Maybe you are the kind of oak tree with solid branches to support those around you. Nobody can achieve without the support of others, friends and family frequently playing the most important role. This is part of being a silent hero and is a very important role in life. A film is not a box office hit without the lighting engineers, make up artists etc. Yes the actors, actresses and directors will walk away with the awards but even the tea boy’s contribution was important!... do they have tea boys these days? Wasn’t Simon Cowell a tea boy once?!?! Even with that said, there is probably something you wish to achieve for yourself.

Reality TV provides very good examples of how people respond to challenge. Pop Star to Opera Star, Strictly Come Dancing and years back there was a programme where people were trained within 6 weeks to undertake a profession that they had no links to at all, in fact jobs that were so far removed from their own it was laughable. I recall a vicar who trained as a used car salesman... moral conflict wouldn’t you say! The point is that on many occasions they fooled the experts who had to spot the faker. These willing guinea pigs were up against people who had years of experience. Maybe their enthusiasm & determination to bluff had a good effect however some people gained skills for life as a result. Giving you a personal example, I had no computer skills & couldn’t even cut & paste in 2007, however was determined to learn how to use a PC properly & have since passed an NVQ level 2 in ICT skills... a little training, attitude of mind and application are powerful tools!

Another class of people discovering their potential are those who undertake tremendous challenges for charity, conquering a fear of heights to sky dive, challenging themselves to run marathons when the word ‘run’ doesn’t usually enter their vocabulary. Sometimes it is easier to do things for other people than it is to do it for yourself.

SUGGESTION> Think about the things you would most like to do in life & plan how you will achieve them. It could be a simple dream such as visiting an exotic location; maybe it’s more complex, owning your own business or changing careers. Whatever your goal, everything is achievable with time if you plan and execute. This does not mean that ideas will jump into your head immediately, they might but often we start with the acorn... Its Braap was simply a name in a haze of ideas at one point but has come a long way & is still developing; it has definitely not fulfilled its potential BUT we are on the way & receive many enquiries from people wishing to find ways of working together. Another point to remember is that as you reach one boundary and cross it you can impose another to ensure constant progress.

Potential is a word that suggests more & to summarize I would say, ‘Life is evolution & evolution is life!’

Jaz McKenzie
If you have undertaken successful challenges & would like us to tell your story contact itsbraap@live.co.uk

Email ThisBlogThis!Share to TwitterShare to FacebookShare to Pinterest
Labels: 'Self confidence';determination;'oak tree';acorn'