I am always curious as to how people create names for themselves. I do know how I came across Jaz McKenzie which simply popped into my mind when I used to daydream a great deal!  This is more involved so I'm very pleased to bring you Mozez discussing the thinking behind MOZEZ- and a great deal more besides! 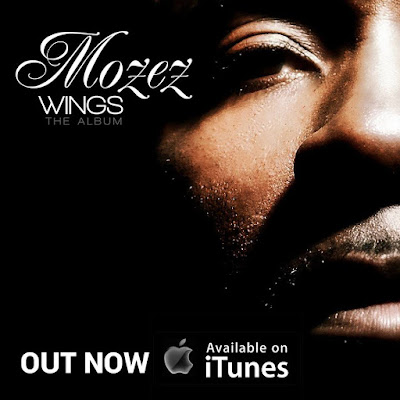 In the beginning!
Mozez came about in 1999-2000. My name I used before as an artist was Osmond Wright, my real name, and it just didn’t feel right at all so I decided to try and think of another one. I liked Motown music so that was where I got the ‘Mo’ from. It’s a silly way to get name! So, Mo from Motown- and this might sound pretentious but I was thinking, ‘OK. How do you see yourself?’ ‘How would you project yourself in ten years?’ I wanted to be at the top basically and the word that came to me was Zenith, so I got the ZE from that and put them together as Mozez. (Laugh!) It doesn’t make sense but that’s how it came about. I’m into Motown music and that’s really the key to it.

Now, the biblical Moses was a prophet which you are well aware of with your church background. When you chose the name Mozez, did you think at all about the type of music you were singing at that time?
Yes in a way because I have always been a person who has a strong spiritual connection, singing in churches and because of my Dad (a preacher.) I have always loved that; the idea of spiritualism; the whole concept and I see myself as someone who is trying to deliver a message, not necessarily in the Christian way of being, but more as a sort of social messenger. I believe that I am a person who has a story to tell and you can accept it but you don’t have to. A sort of moral messenger basically.

So what influences drew you away from your traditional Christian roots?
I think, as I grew older I realised that there was so much more to the concept of God. When I came here to the UK I had a lot of questions that troubled me mentally, troubled my mind, questions as to what God actually is and what Christianity is. I went to Hampstead Bible School to study, just to have a bit more information to find out the truth about God, the ideology, the concept. I would say, as time went on my understanding of God developed into something else. Instead of being a God who is into a structure I now see God as a universal concept. Instead of God as being into particular people, I see God as encompassing everything. Christianity sort of put God into an,‘if you aren’t with me, you are against me,’ type thing and I believe God is so much greater than that! I believe God is so much greater than all the religions put together and these are just our way of working out God. That’s all it is, mans’ idea of how he sees God, but God is so much more than religion itself whether it be Buddhism or Christianity. He is so much wider than that so my horizons changed from being the sort of person who was a Christian and now being the sort of person who believes in God, period. I don’t have a congregation or a people that I belong to, the world is God; the whole planet is God; science is God; everything is God.

I think a lot of people have come to that conclusion. So how do you fit the concepts of Heaven and Hell into that thinking?
A good question. I think Heaven and Hell are real but our understanding of Heaven and Hell has become sort of convoluted. We think Heaven is a beautiful place and hell is this dreadful place.  My perspective is that it’s more a case that you suffer- you suffer bad things if you are a bad person and if you are a good person you have a better life. The end product of everything is that whatever you are, whatever’s connected to you, if you do bad things your generation will suffer the penalty for that. It’s like a sort of hell or heaven in a way. A simple concept; I don’t necessarily believe in hell fire and I don’t know what happens when we pass on, but I think that while we’re here we can be in heaven or hell. I can sort of think about the afterlife and have some ideas on that but I might not be right. Heaven to me here on earth is about spiritual awareness, how we treat people. That’s my heaven and hell.

Coming up next- a return to those meaningful lyrics!

For help with your image- Bio's, Articles, CD write-ups contact: itsbraap@live.co.uk
Posted by ITS BRAAP ITS LIFE !! at 19:14