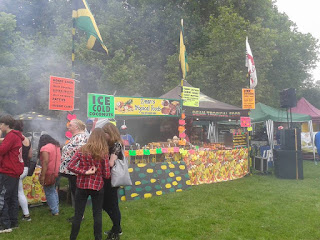 If you came along to the Acton Carnival you will have celebrated one of the best days of 2016 with us! The entire event was buzzing, however I spent my day with Life FM and team Urban Delight, so was primarily by the tent where we seriously ‘got it going on!’

Fatha Chalky hit the deck the second the carnival started and, having handed over to Digital Clash with DJ’s Sound Killer and Sweet P, was still going strong at 7pm when closure became compulsory. Big respect- not just for his stamina but also track selection and crowd rapport, Fatha Chalky's focus being on his music and messages of love, unity and joy- let’s just come and have fun- I believe Fatha Chalky really captured the spirit of carnival. All credit to Digital Clash too who churned out a cool selection of hot tracks!


There were many stalls including art and crafts where I failed to venture, however the eateries were doing brisk trade with people queuing up for their favourite foods including dumpling!. We were next to hot meals and juices- have to hand it to the juice man lol- busy, busy and he had descriptions of the juices in full view- I was attracted to the Golden Goddess- suddenly realising it was actually called Golden Goodness- daaaaaam, the Goddess is so much more enticing however it was an excuse for a giggle. Big up to Mr Juice and thanks for posing for a shot! 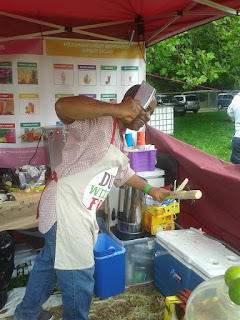 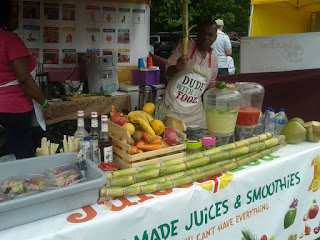 It was great to experience the authentic Urban Delight vibe in full swing and I even managed to grab a couple of mini interviews with Peter Evans AKA  Fada Urkle, King of Dancehall- how cool is that- and Reggae artist Norris B; both of whom I met for the first time. When you haven’t been to a team event for a while or if you have never previously seen Urban Delight artists perform, you’re in for a treat. First up was Beat Boxer Nahum Effick who instantly halts the passing foot traffic! His mastery of the art catches everyone’s attention. There’s something captivating about Beat Boxing and Nahum excels at the art; getting whoops of recognition for his talent from the crowd.

Next up was Norris B with his cool brand of Lover’s Rock singing about- well... love and relationships primarily however he included food for thought with Jah Jah Love and Ghetto Youths Cry. Being the first person up with a backing track was tough but everything got into gear for Norris’s smooth performance.

VS Goodchild and Gee Mansa performed a couple of raps for team Urban Delight- they definitely got into their flow and I liked the line about not needing an R Kelly song to confirm you can fly! Pretty awesome twist. 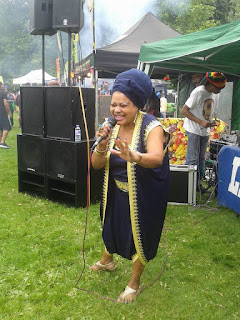 Winsome Moncrieffe-Mitchell-  what a great name for a potential Lover’s Rock Queen, kicked off with a little accapella, her style, before delivering her debut single recorded with Family Love, ‘Hurting Me.’ Winsome's singing and personality went down an absolute storm, receiving rapturous applause before making her way over to the main stage.

I caught a couple of main stage acts myself and was thrilled to hear Canadian multiple award winning artist Tasha T who deserves every recognition received! I especially loved her song, ‘Walking Dead.’


Two acts previously unknown to me on the main stage were Empire- three young guys from Trinidad who sang their modern version of Soca- totally wicked, and a very talented young lady, Kianja who has a very fresh jazzy style but is also very versatile. Definitely someone to watch out for and she informed me that she is currently studying at the Brit school- excellent!

I have to say, it’s really good to go to these events and explore new talent, and also to appreciate being part of a really strong team. I'm already looking forward to next year's event- Team Urban Delight will be back!